Home › Debt › 5 RISKS to getting a College Education

You read that first word right?RISKS?as in something to lose! Historically risk is not a word normally associated with a college education, but this isn?t history?it?s the big, bad now and the rules have changed. Not only is the cost of a college education much higher than it?s ever been (and rising relentlessly), but the ways people are paying for it are farther out there on the danger scale. And the jobs that once reliably awaited students upon graduation don?t seem to be there in either number or compensation. To paraphrase a well worn clich?, this ain?t your father?s college education.

The college game is changing. A number of factors have developed that have turned the one time ticket to the good life into a high risk proposition. I?ve identified five and you could probably cite a few others. 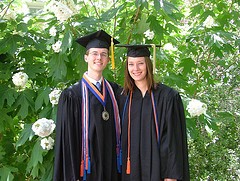 No matter what it is we?re pursuing and how noble the cause, in a world of limited resources, we always need to consider the cost/benefit ratio. That ratio is way out of balance in many college norm careers. Back in the 1980s when I was in college it was possible to obtain a college degree for about the amount of a starting salary in a typical degree field. In that environment, going to college was a risk free proposition.

Today, larger amounts of money are being paid for college while the job prospects in many degree fields are weakening. It?s now possible, even typical, for a college education to cost several times the starting salary in a typical degree program. There is a real risk that the full value of the price paid for a college education may never be recovered.

It?s bad enough that college has such a high price tag today, but the problem of cost is magnified by the fact that debt is increasingly being used to pay for it. That debt carries well into the working years, and even though it may have preferential rates of interest, it?s still a drag on the graduate?s financial future.

Kelli Space wrote a post over at Budgets Are Sexy titled I Went to College and All I Got Was This $200,000 Bill?that was the amount of the student loan debt she had accumulated while earning her degree. That sounds like an incredible amount of debt and perhaps it is at the upper end of the range. But with college costs rising steadily and incomes and savings levels stuck in neutral, the debt numbers are getting higher all the time.

Whether it?s $200,000, $100,000 or ?just? $50,000, we?re talking about a staggering amount of unsecured debt! Liabilities of this magnitude can be life altering?it sends the graduate into an increasingly uncertain job market with one, large strike against them.

The four years it takes to get a college degree is long enough that the job prospects in a chosen field of study can change significantly in that space of time. And many students are spending more than four years to get an undergraduate degree alone.

The pace of change in the world seems to be quickening, and that includes the growth, maturation and decline phases in many companies and entire industries. There?s now a real risk that a student can spend years preparing for a career field he?ll never work in.

With jobs in many fields degrading or disappearing the career path for graduates is increasingly pointed in the direction of some form of self employment. Sadly, college coursework preparing students for the entrepreneurial path is close to non-existent at the undergraduate level.

College curriculum is geared heavily in favor of the organizational universe of the corporate world, various levels of government and even non-profits, but not life running a small business. Part of the reason for this is that organizational training is readily teachable. Entrepreneurial training, by contrast, is so decentralized and diverse that it doesn?t lend itself to the type of comprehensive curricula that make up the vast majority of college programs.

There?s a real risk of preparing for declining organizational careers in a world where self-employment is fast becoming the new normal. College programs may eventually adjust to this change but there?s little evidence that any sort of shift is even on the horizon, let alone a work in progress.

There may be certain degree programs that can help you become self-employed, such as marketing, business management or information technology. Any of those degrees might set you up to handle the big picture challenges that self-employment requires, but perhaps not the specifics.

This risk starts with the question, ?what else could I be doing to build a career that I might not be doing while attending college?? The job market is becoming increasingly selective?you won?t necessarily have a career by virtue of having a degree.

Many college norm career fields are now in oversupply, while jobs in the skilled trades and technical fields go begging. Such careers, as well as self-employment, often take an entirely different path than college norm jobs. Technical school training, apprenticeships and the good, old ?school of hard knocks? are often the best (or only) way to enter these fields.

In many fields the four years that someone might spend in college would be sufficient to gain the training, experience and credentials that would enable earning a living wage with greater career security and job mobility than many college norm careers afford. In addition, many trades and technical fields are now paying salaries comparable to or even greater than college norm careers.

How can we respond to the college education risk

Where ever there?s risk, we should be practicing risk mitigation; what can be done to do that in connection with a college education?

What do you think about the cost of a college education relative to the employment opportunities that are available in today?s economy? How much money should a student be prepared to pay for a degree? Are there any other paths a would-be student might pursue that won?t leave him/her buried in debt after graduation?

16 Responses to 5 RISKS to getting a College Education