Early retirement has become a favorite topic in the personal-finance blogsphere. There are even blogs devoted primarily or entirely to the topic. The general theme is save enough money regularly, and invest it faithfully (in S&P 500 index funds), and you?ll be able to retire at 55, 50, 45, 40, 35 or even 30. I?ve read a lot of articles on this topic, and if there?s one consistency I?ve noticed it?s that the early retirement health insurance dilemma is completely ignored.

I suppose there?s good reason for that. If it?s taken into consideration, it throws the whole arrangement into doubt. Health insurance is probably the single biggest crisis facing America today. And as bad as it is right now, it promises to get worse.

That?s true on both a national level and an individual one. On the national front, premiums are increasing predictably each and every year. And on an individual level, since we?re all getting older every year, that age-related health insurance premium increase thing is kicking in reliably.

Turning a blind eye to the early retirement health insurance dilemma is akin to ignoring the elephant in the room. Yet it?s exactly what happens in virtually all early-retirement scenarios. After all, if you have to factor health insurance into the equation, the whole rosy scenario collapses.

How bad is the early-retirement health insurance problem, and are there any solutions?

The fundamental early-retirement health insurance problem is that you are no longer covered by an employer sponsored health insurance plan, and you?re too young to be on Medicare. That puts you at Ground Zero for America?s health care crisis.

It?s not to be taken lightly. The problem is that due to age and the lack of an employer subsidy, health insurance can easily be the single biggest expense for a retired couple. The problem is made even worse by the fact that early-retirement theoretically occurs in middle age, which causes higher insurance premiums due to age. And the closer that you move to 65, when you will finally be eligible for Medicare, the higher those premiums will become.

It?s not an exaggeration to say that if you don?t have a workable strategy for the early-retirement health insurance dilemma that you probably won?t be able to retire early at all. No one can possibly retire without having a provision for their single biggest expense.

I don?t hold out much hope for the expected Trump Administration plan to overhaul Obamacare. It may happen, but it probably won?t ? the forces supporting the status quo won?t even admit that the system is broken, let alone allow reform to take place. For that reason, were stuck having to plan to work with the system that we have.

The most effective way to demonstrate the magnitude of the early-retirement health insurance problem is by working an actual example. This is very easy to do using Healthcare.Gov?s health insurance plans & prices web page.

I ran an example using a couple, both age 50, earning $100,000 per year, and living in the Atlanta metropolitan area. Atlanta is an excellent example, because it is both a very large metropolitan area, but it has a more moderate cost structure than other large urban areas.

Here?s what turned up: 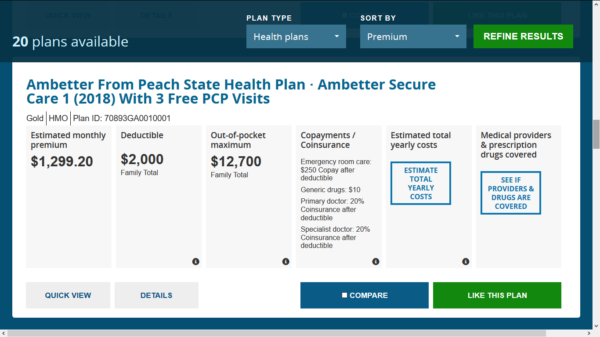 But let?s get back to the base monthly premium. $1,300 per month will very likely be your single highest expense in early retirement. This will almost certainly be true if you have paid off your mortgage, or plan to have it paid off by the time you retire.

The early-retirement strategies that I?ve seen again and again routinely fail to take this totally predictable expense into account. What it means is that even if you could survive comfortably on $5,000 per month, you?ll have to increase that to a minimum of $6,300 just to cover your basic monthly health insurance premium.

But with that factoid in mind, let?s propose some suggestions.

This is certainly the simplest solution, though it?s not exactly a fair one. After all, it presumes that while you?re enjoying early-retirement, your spouse must maintain a job so that you can both have health insurance. That?s not equitable. But of course, it assumes that your spouse has ? or will have ? a job that includes health insurance when the time rolls around for your retirement.

If you do go this route, be sure to have a workable back-up plan. Jobs can be lost, especially during economic downturns, and even more so as we age. It?s that age discrimination problem that everyone likes to pretend doesn?t exist. After all, age discrimination is illegal, right?

2. Plan to Get a Part-time Job with Health Insurance

There are probably more than you can imagine. For example, while it?s become almost a clich? that Starbucks offers health insurance to part-time workers, there are so many other employers, even entire industries, where the practice is common.

One example is banks and credit unions. Others include hospitals, county and municipal governments, colleges and universities, insurance companies, airlines, and even many grocery store chains.

You typically have to work at least 20 hours per week in order to get this benefit. But it will generally be a lot more affordable than purchasing a plan on the state health insurance exchange.

It?s also a strategy that involves creating an income dedicated to paying for health insurance premiums.

3. Have a Part-time Business and Deduct the Health Premiums

This strategy won?t enable you to get less expensive health insurance coverage, but it will provide you with a valuable tax deduction. Under current tax law, the self-employed can deduct the cost of health insurance premiums.

It isn?t a business expense per se, but you can deduct it nonetheless. One of the big advantages is that you don?t need to itemize your deductions in order to get the benefit. It can be deducted on page 1 of your income tax return.

Let?s say that you pay $16,000 for health insurance and you?re in the 15% marginal tax bracket. The deduction will enable you to reduce your taxable income by $2,400. Not a windfall certainly, but every little bit helps.

It?s another example of creating an income dedicated to paying your health insurance premiums.

One of the advantages to these plans is that they are ?ACA compliant?. That means that if you participate in a plan, you will be exempt from the Obamacare penalty for not having health insurance.

There are several different plans available, so you really have to do some deep research. But from what I?ve heard and read, these plans can represent a viable solution to the healthcare dilemma.

There are limitations to these plans however. For most, you must be an evangelical Christian in order to qualify. That means that you belong to a church and regularly attend, and do not participate in undesirable behaviors. This can include smoking, excess drinking, and lifestyles deemed to be immoral.

They also practice old school health insurance underwriting techniques. That means that if you have pre-existing health conditions, your premiums may be higher, or you may not be allowed in the plan.

Another problem is that they are not true insurance. That means that you must work with participating healthcare providers. The systems generally operate on the direct pay basis, rather than on a standard reimbursement that?s typical of health insurance plans.

5. Get the Cheapest Health Plan Possible and Set up an HSA

This is based on the traditional idea of taking an insurance plan with the lowest premium, in exchange for a high deductible. You then fill in the deductible gap by adding a Health Savings Account (HSA) to cover the deductible. You can contribute up to $6,750 to an HSA for 2017 (for a couple or family), and it?s fully tax-deductible.

This strategy is no longer perfect, though it does merit investigation. The biggest issue is that under the Obamacare health insurance structure, taking a higher deductible doesn?t usually save much money. 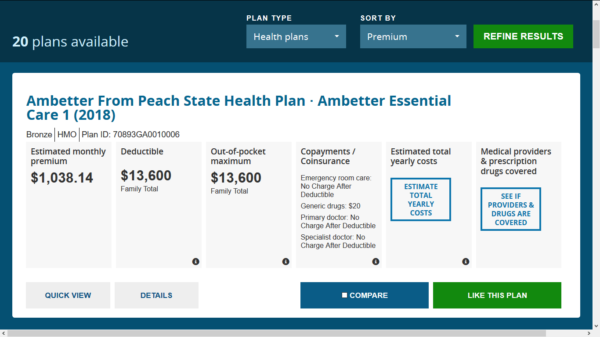 That reduction in premium totals just $3,132 per year, which hardly justifies increasing the deductible by $11,600. But if you?re healthy, and don?t expect to use your health insurance plan, this could be a way to save a few thousand dollars per year (between the premium reduction and the tax deduction on the HSA).

There?s one other issue that would make this strategy a tight squeeze. There are limits on the amount of the deductible and the out-of-pocket maximum that a plan can have. For a family plan (or a couple), you can?t add an HSA account if the plan deductible exceeds $6,550, and the out-of-pocket maximum exceeds $13,100. This puts a serious limitation on the use of an HSA with an Obamacare health insurance plan.

That said, we have a private HSA plan in place, and it works very well for us. But then, neither my wife nor I are retired, nor do we use an Obamacare health insurance plan (at the moment!).

This is probably the best strategy overall ? if you can manage it. In the earlier examples of health insurance premiums, I used the assumption of a married couple earning $100,000 per year. There is no Obamacare tax subsidy with an income at that level. It completely phases out when your income exceeds 400% of the federal poverty level.

But if you can reduce your income in early-retirement, you can get a much more generous subsidy.

For example, in re-running the initial example ? but using an annual income of $50,000 ? a tax subsidy of $768 per month develops. It makes a huge difference in the monthly premium: 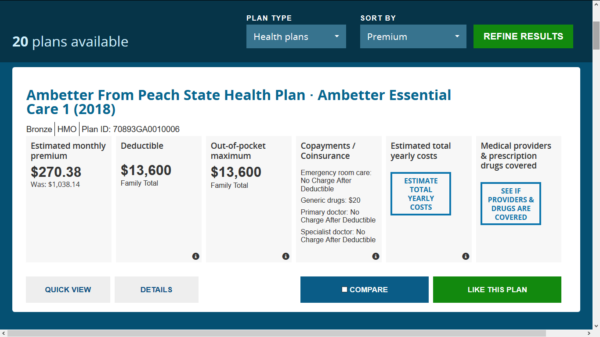 The premium for the high deductible plan goes from $1,038 per month down to $270. That?s downright affordable. It might even be a compelling reason for early-retirement.

Of course, that assumes that a couple could comfortably survive on $50,000 per year. In many low-cost rural communities that would certainly be possible. But in the big metropolitan areas, where most people live, it would be tough.

Still, it?s a viable solution if you can make it work.

Are you in early-retirement, or are you working in that direction? If so, have you contemplated the impact of health insurance on your early-retirement? Have you come up with any other solutions to this problem that you can share with others?