Home › Investing › …And the Bull Shall Lie Down with the Bear 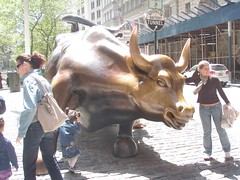 These terms come from the pre-Buy-and-Hold Era. In those days, it was all about timing the market. The operative slogan was ?Buy Low, Sell High.? That?s timing. Short-term timing. The kind of timing that doesn?t work.

The most important thing that the Buy-and-Holders got right was their idea that we all should be focused on the long term. In a world in which most investors were focused on the long term, short-term timing had to go and to a considerable extent it has. Unfortunately, long-term thinking has not yet permeated our consciousness to the extent it needs to for us to adopt an investing lexicon that reflects our new investor goals.

The Bull and the Bear

The future of investing is a world without bulls and bears. If we cannot effectively predict short-term price moves, we shouldn?t try to predict them at all. So we won?t.

I?m not a bear?no matter what anyone might think

People often call me a bear because I have been saying since 1996 that stocks offer a poor long-term value proposition. No. I make no calls about how stocks will perform in the next month or the next year. I am not a bear. I do not make guesses as to where stock prices are headed in the short term. I acknowledge the objective reality that stocks offer a better deal when they are selling at fair prices than they do when they are selling at crazy prices.

The trouble we are having as a society making the move from Buy-and-Hold to Valuation-Informed Indexing is due to the expanse that we have to travel to make the shift. The point that I am making in this column is that we actually need a new language to make this change. Words like ?bull? and ?bear? do not make sense in the post-Buy-and-Hold world.

Say that you were buying a car and you made an effort to get the best deal possible. Would people call you a ?bear? because you threatened to walk out of the dealership unless the dealer agreed to a reasonable price?

I have been arguing on the internet for sane, rational, smart investing strategies for over eight years now. It pains me that many good and smart people whom I consider friends have become angry with me because I have made the case for why stocks offer a bad deal at the prices at which they have been selling since 1996. One of my biggest complaints with Buy-and-Hold is that it makes those who follow it so emotional. A strategy that causes the anger and hate and shame that I have seen cannot be something good.

The problem is that many Buy-and-Holders are living with one foot in the old world and one foot in the new. They understand that long-term investing is the future but they still use terms that were developed in the pre-Buy-and-Hold Era. They think in terms of bulls and bears, and presume that anyone who sees anything wrong with stocks must fall into the ?bear? category. But it is not so. Being price-conscious is not being bearish. These are very different concepts.

I want to be friends with the Buy-and-Holders. They have taught me many wonderful things. And I believe that I have some things that I could teach them in return. We are all on the same side; we all want to know what it takes to invest effectively. We all should be working as hard as we can to learn as much as we can from as many different sources as we can.

For now, though, the ?bear? is seen as the enemy of the Buy-and-Holder and anyone who has anything negative to say about stocks (even something as obviously true as a claim that they are not worth buying at insanely high prices) is classed as a ?bear.? This must change if our society is to recover from the damage done to it during the years that many of us came to believe that price doesn?t matter much when buying stocks.

This is the season for dreaming dreams of peace on earth for men of good will. I pledge to do what I can in the coming year to better understand the Buy-and-Holders and to do what I need to do and have so far failed to do to help them better understand me. I am not an enemy to them and they are not enemies to me. We all are lucky enough to live during a time when breakthrough advances in mankind?s understanding of how stock investing works are coming so quickly that it is hard to keep up. We all need to keep the big picture in mind and celebrate the insights we have been able to develop together.

Buy-and-Holders are not ?bulls? anymore than I am a ?bear.? They do not believe in guessing which way prices are headed in the short term anymore than I do. We have that in common. I think that?s part of the communication problem — Buy-and-Holders and Valuation-Informed Indexers have so many things in common that it causes a bit of a freakout when it becomes clear that there is at least one point (the importance or lack thereof of valuations) on which there is disagreement.

We will work it out and we will all move together into a brighter future for all of us. The bull shall lie down with the bear. It?s when things turn very dark and very cold that you know for sure that the season of light and hope will be arriving soon.