In Jobs and Careers That Aren?t Coming Back we listed and discussed 13 career fields that are in a state of decline and unlikely to recover. Today we?ll cover the very opposite: job fields that are here to stay and likely to expand. 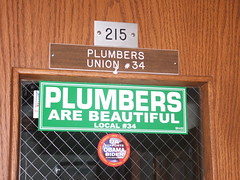 Global off-shoring of jobs and advances in technology are squeezing many jobs and careers into gradual extinction, as computers and cheap overseas labor eat away at once common fields of employment. But not all career fields are affected.

People who can produce or fix things often have the greatest job security. The world is full of machines, all in need of service or repair sooner or later. Being one of the people who can keep them going is a chance to start to a side business or to full scale self-employment. Equally important, though we tend to think of most innovation occurring in laboratories, many technological discoveries happen somewhere out in the field, produced by people who can work with their hands.

In Blue-Collar Jobs in Demand for 2010 Michelle Goodman lists the following job categories, all having positive future prospects:

I?ll add another to that list: Home remodeling and repair. Given the weak economy and the even weaker housing market, a lot of homeowners are opting to renovate rather than move. I know a few people in home remodeling and they?re busier than ever.

(An even broader list appears in The Skilled Trades Are Well Worth Investigating.)

There are more than a few advantages to blue collar work, even in this golden age of college education.

No outsourcing. These jobs can?t be outsourced to Bangalore or any other location anywhere in the world. The work involved in blue collar jobs is done on site with human hands and as marvelous as the accomplishments of technology have been, the ability to replace that involvement probably won?t come in our lifetimes, or even many lifetimes to come.

No transfers. It?s highly unlikely that you?re job will be transferred to a location somewhere across the country. In Buying vs. Renting a Home ? Its Not All About Money, one of the factors that needs to be considered in the buy vs. rent decision is local job stability. Given that house values are no longer rising to support the five-years-and-flip game, having a career that enables you to stay in your home and community long term is more important than ever.

No student debt. You won?t come out of the gate carrying five- or six figures in student loan debt. Blue collar jobs are typically entered through apprenticeships supplemented by classroom training. It?s more of an ?earn and learn? in the old world tradition.

Second income potential. How many desk jobs are readily convertible into second incomes or side businesses? By contrast, the trades lend themselves well to engaging in a side business especially.

Barter potential. If you can build or fix something, you have something to trade on the open market. Since blue collar jobs essentially involve building and fixing, you have a barter skill built into your regular career. You can develop an informal barter arrangement with other trades people, or to trade for other services you need.

Job mobility. One of the advantages of blue collar work, at least the skilled trades, is that there?s demand for workers in nearly every city, state and region in the country, and even in the world. Many career fields are regionally concentrated, but electricians, plumbers and carpenters are needed everywhere.

Every career field comes with one or more weak spots, and the blue collar world is no exception. With the obvious exception of auto mechanics and home remodeling, a significant slice of blue collar workers are concentrated either primarily or entirely in new construction.

The boom/bust cycle of real estate development, whether residential, commercial or industrial, puts many blue collar jobs?the ones dependent on new construction?at even greater risk than other career fields. The recent experience in the home building industry testifies to this.

The security of blue collar work then is in those jobs centering on service and repair of existing systems. Not only is repair work the most secure, but it also offers the greatest potential for self-employment.

Blue collar work isn?t for everyone, but?

I have a nephew who left college to train to be a diesel mechanic and he absolutely did the right thing. Not only is he making an above average income, but he has far greater employment security than most other careers in the past few years. Though I have a college education myself, my wife and I are advising our teenage son to follow the same course as his cousin.

Taking a plunge into a blue collar profession fits the true definition of ?retooling?. But sometimes you have to take a step back to go forward.

?
If you could do it all over again, would you consider a blue collar field? Are parents maybe doing their kids a disservice prompting and prepping them for college without considering alternatives? Is there more employment security in college norm occupations or in the blue collar trades? Do you know any people who chose the blue collar route and have thrived, even in this economy?