Home › Commentary › Can You Afford Your Child?s Senior Year in High School?

When I started OutOfYourRut back in 2009, one of my bedrock rules was that the site would never be used as a place to rant. But it?s also true that if you live long enough, you?ll eat every word you?ve ever spoken.

I?m about to eat mine – but I don?t feel the least bit bad about this one.

Maybe I?m getting cranky with age, or maybe there?s just more to complain about than there used to be (that’s the one I like to believe!). Today I choose to eat my words ranting about high school – but mainly about senior year. My daughter is a senior this year, my son having graduated the year before last.

Get your finances ready before it hits. 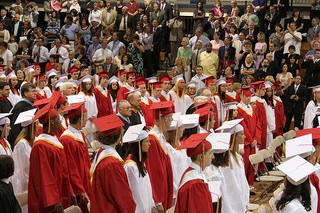 Public school cost more now than it ever has, certainly more than it did when I was in high school. No single year costs more than senior year. There are all kinds of extra fees you pay when your kids are in school these days – sports and activity fees among the highest – but senior year carries a battery of it?s own special expenses, and you?d better have an extra $2,000 to $3,000 (or more) to be ready for it.

Here?s some of what you should be ready to pay:

Year book. Where I live, year books cost upward of $100, but that?s not all. You can pay a lot more if you have your child?s name engraved in the book, or have a ?shout out? (parent?s congratulatory ad) somewhere in the book. When I was in high school, the book cost about $10 and there were no up sells. I think that was better – no pressure on the student and her family to compete for upgrades.

Senior photos. We just went through this phase and my wife and I felt completely violated. We paid $139 for the ?sitting fee?, and thought that was it. But when we went to the photographers office suite, we found out it was only the beginning.

They take a bunch of photos at the photo shoot, but when you go to the photographers to choose the shots, you?re shown everything BUT the cap and gown photo that you think you?re coming for. They put you in a warmly decorated room, offer you herbal tea and play soft music while a large computer screen on the wall shows you every one of the enhanced photos they took of your aspiring graduate.

This display had ?dog and pony show? written all over it. The purpose was to breakdown your resistance to the up sell packages, that ran close to $2,000! No we didn?t fall for that, but they still have you on the ropes emotionally. We chose the cheapest package and added three additional shots. We felt lucky to get out with the lowest priced package for $281. But when you add in the sitting fee, that?s $420. For the cheapest package.

But your baby only graduates once, right? They?re counting on your thinking that way so they can get a bigger grab. Be forewarned.

When I was in high school, I think we paid $15 to produce a single photo for the year book, and that was it. No soft music, no herbal tea, no up sell. Personally, I find it disgusting that the schools are getting in bed with various merchants, and allowing them to put the hard sell for more dollars on the students families. A friend of mine in the photography business tells me that they do this because the schools get a cut of the loot. Why am I not surprised?

Class rings. Last I heard, this one is now around $350. Mine might have been $20 way back when. My son didn?t get this trophy, and my daughter won?t either.

Senior trip. I think this is a trip to Florida in the spring. They advertise that the cost is $170 per student. Our son tells us that the real cost is more on the order of $600 to $800, and the $170 is just the deposit. Given the sitting fee fiasco with the senior photos, I?m inclined to think he?s absolutely right about this. And nope, no senior class trip when I was in high school.

Prom. You can go on the cheap and look like a nerd for about $200 to $300, but you?re only young once right? Proms are held at prestigious clubs, and involve tuxedos, evening gowns, premium hair and make-up sessions, premium hotel stays the night after, lots of flowers, and of course, more photo shoots. Some parents even pay for limousines to chauffer their kids. You can spend thousands on this single event. Maybe I?m just too common, but this kind of opulence in middle class circles seems more than a little bit over the top. There was some of this at my high school, but nowhere near the scale it is now.

Cap and gown fee. When I graduated, we were loaned a cap and gown – maybe we paid a $5 rental fee, maybe not – but today you buy a custom fit cap and gown. That?s right, you buy it. It?s somewhere between $75 to $100. No more borrowing. Want to bet the schools aren?t getting a cut of that too?

Premium pricing seems to be the order of the day

Now I want to state something for the record: the high school that my kids attend(ed) is an outstanding school in every respect. But it is an upper middle class high school, and that may influence the above costs. Maybe it isn?t this extreme where you live. A lot of people around here – but probably not the majority – can comfortably afford all of this. The problem is that even if you can?t, you?re still forced into spending more than you would as a result of the increase in expectations.

There seems to be an effort to intimidate everyone into spending more, spearheaded by the schools themselves. It?s a thinly veiled attempt at premium pricing in the name of high school graduation. But that begs the obvious question: who benefits from this spending frenzy???

Since it?s all being promoted directly through the schools, it?s a safe bet that they?re getting a cut. That guarantees that the pressure won?t let up.

If people with more money are given the option at trading up on the ?senior year experience?, what is the effect of this on the general community who can?t afford to do the same? What about the kids who come from families who specifically can?t? More important, why is there even an emphasis on premium pricing at a public school?

Ironically, I went to high school in a community with a similar demographic, but people weren?t being herded into up sells. Obviously it was a different time, a time when people in general were more practical minded. Back then, there was a lid on what you could spend on school related functions. Today, it looks like some sort of perverted arms race to see who can outdo everyone else. Why should a public school – any public school – promote such excess? And what kind of message does it send to the kids?

I?ve made this point to my wife many times during the 14+ years that our kids have been in public schools. The schools are now asking the parents to provide school supplies, to fund various charitable collections, and to pay thousands of dollars in extra curricular fees for sports and music participation. And then there?s senior year.

Author and motivational speaker, Robert Ringer, who has six children of his own, wrote about what he referred to as ?Brigadoon high schools?, so named because they bear a resemblance the mythical and surreal Brigadoon, the fantasy world from the musical by the same name. He calls these high schools – which he estimates represent about 10% of the high schools in America – publicly funded private high schools. They essentially cater to students from upper end families, and they foster an environment that resembles what is seen at elite private schools.

It is apparent that my kids attend(ed) just such a high school. We all want our kids to have the best educations they can get, but be forewarned – it will come at a steep price, even though it?s a public school. Senior year is just the last, best shot at excess.

Here are my suggestions for senior year:

Does anyone else feel as if this senior year ?do it for the kids? bacchanalia has gotten out of control? Is it much different at less ?elite? schools?

( Photo by Jim, the Photographer )
Tweet2
Share10
Share
12 Shares
← Building a Blogging Career – One Step at a Time
A Side Business May be Your Best Opportunity For the Future →

14 Responses to Can You Afford Your Child?s Senior Year in High School?