Home › Autos › Cheap New Cars ? Are They Worth the Money? 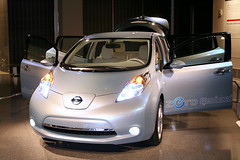 Yahoo! Autos had a great piece from CNN Money last week. 10 great cheap cars gives a list of ten cars for well under $20,000.

A few on the list for 2011, with their given price ranges, include:

Looking at the low end prices on these cars, it?s clear that they begin to compete well with better quality used cars, and for that reason alone they merit further investigation.

We should never buy anything on price alone, but as expensive as new cars?and even used cars?are these days, these prices are?interesting.

But what are we getting at these prices? Are they actually decent cars that will last a few years, or are they throw-aways?the ultimate manifestations of ?planned obsolescence??destined for the scrap yard after five years? Do they come with important options?like engines?or are they your basic ?Flintstones Car????

As you can see from the list above, there?s a pretty wide range on the final buy price of one of these cars. The Honda Civic shows an upper end of over $25,000, and that?s where you?re beginning to bump heads with the lower end of some higher quality new cars.

My guess is that those upper ranges are based on certain packages; you could probably take the price about as high as you?d like to go if you pack the car with enough options. And that?s the moral of the story here; cheap cars will only be cheap if we buy them largely stripped down. Options are the enemy when price is the overriding consideration.

How much creature comfort are we willing to do without in order to keep our car expense to a minimum? Which is an excellent bridge into an alternative strategy?

What about a better quality used car?

Up to this point, we?ve been focusing on low priced new cars, but what if we decide that all that cheapness isn?t exactly what we?re after? What if we want cheap, but with a little bit more creature comfort?or at least a little bit more legroom?

All of the cars on the list are small vehicles?manufacturer claims of roominess notwithstanding. I?ve seen most of these cars on the road and find it hard to believe that I can load my family of four into one, as well as some light luggage, and still have the car reach as much as 40 miles per hour.

A higher end used car might represent the price/quality alternative.

According to Kelly Blue Book, you can get a nicely loaded 2008 Toyota Camry LE Sedan 4D with 50,000 miles on it for around $16,265?price-wise, that compares favorably with the list of cheap new cars above. Yet it?s a larger car with a full suite of options and a longer track record than most of the cars on the list.

So should you buy a better quality used car instead of a cheap new one? There are advantages to going either way. True with the used car you get a better quality car, but there are substantial advantages to going new. You?ll be the original owner, the car will have maximum warranty coverage and you?ll be able to get the best financing deals available.

Which way you go may depend less on number crunching and more on good, old-fashioned personal preference.

Resale value?should it be the deciding factor?

One factor I think of as being almost a litmus test when choosing between cars, and that?s resale value. That?s the amount of value we have stored in the car at the end of a reasonable period of use, and it?s one of the factors that will determine what kind of car we will graduate to when the time comes to replace what we have.

On that score, let?s consider three cars here as to what they?ll be worth after five years of ownership. All numbers are based on ?suggested retail?; please keep in mind that this is an attempt to predict future values, which is nothing better than an educated guess at the very best (hey, we?re just having fun crunching numbers here!).

The above mentioned used 2008 Toyota Camry LE Sedan 4D. It?s already three years old, but what will it be worth after we add five years of driving say, another 50,000 miles (100,000 total) by 2016 when the car is eight years old? Well, we can?t predict future values, but we can look at past performance as a guide.

If you can handle the manual transmission, the missing air conditioning and doing without a few other niceties like a sound system, the numbers on this look good. Low depreciation, and a fat down payment going forward?what more could a budget want?

Like the Honda Civic, we?re still stuck with manual transmission, but we might not notice while we?re enjoying the air conditioning and sound system that it came with. Purely based on numbers, this may be the way to go. The only drawback on this car might be the image issues we have driving a bottom-of-the-line car?after all, we are what we drive, and none of us like to think of ourselves as a ?budget version?.

Of course, what car we buy won?t come down strictly to the numbers?we?re going to own a car for several years and we have to feel good about driving it. Numbers don?t take into account such factors as comfort, look, ?feel?, power, our own unique personalities or our intended use for the vehicle. But in today?s time of constrained financial options, numbers aren?t a bad place to start either.

Have you ever bought a cheap new car, say well under $20,000 at today?s prices? How did it work out for you? Would it be better to buy a better quality used car instead? What would you recommend to others who are looking to buy a car?

6 Responses to Cheap New Cars ? Are They Worth the Money?