Has health care finally reached the breaking point? Apparently the number of people choosing to go without health insurance is growing. Should that surprise anyone? It?s actually a rational strategy when the cost reaches the point of being unsustainable. If we haven?t already reached that point, we?re dangerously close.

Fortune published a disturbing article on the last day of 2018 that speaks volumes of the current state of American health care. What Americans Taught Us About ‘Risking It’ Without Insurance in 2018 started with this ominous declaration:

?For many Americans, 2018 was the year that health care reached a breaking point. Insurance was still too expensive to buy. It didn?t cover nearly enough.?

Steep out-of-pocket costs are the second threat of the health care/health insurance crisis. Absurdly high premiums are the first. Seeing people go without coverage does become logical at some point. We should suspect many millions more will do the same when the next recession hits, and job losses begin piling up.

?War Stories? from the Article

The writers of this article spent time interviewing people who are forced to go without health insurance. They culled the specific stories from more than 5,000 responses they received to the question.

Here were some of the scenarios:

Each of these cases paints a picture of an individual, couple, or household who are engaging in self-rationing of health care, a topic I?ve written on in the past. Realizing that it’s become impossible to provide coverage for everyone in the household, 100% of the time, people are making trade-offs so that some members of the household can have coverage at least some of the time.

You don’t have to think too hard to imagine yourself being in any one of these situations. That’s what makes the prospect of going without health insurance so frightening. But it’s precisely because the potential is so catastrophic that we need to consider it. And to come up with some workable strategies in advance.

Most Americans are One Job Loss Away from a Similar Fate

According to the US Census Bureau, 56% of Americans are covered by employer sponsored health plans. The rest are covered by Medicaid, Medicare, direct-purchase coverage (presumably Obamacare) or military coverage. (The same report indicated 28.5 million people, or 8.8% of the population have no coverage at all.)

But the flip side of that silver lining is that retaining a job has become more important than ever. If you have employer sponsored coverage, it’s not just a matter of the loss of income, but also of health insurance.

Many millions of people understand that dilemma. That’s what keeps them from changing jobs, quitting jobs they hate, or leaving to become self-employed. The prospect of losing a job, and the health insurance that comes with it, keeps people from moving on in life.

It?s one of the major reasons Americans are increasingly turning into trained ponies, rather than the bucking broncos that built this country into the richest nation on earth.

COBRA and ACA Plans are Not Workable Solutions

Let’s start with COBRA, since that’s usually the first consideration after the loss of a job.

When my wife lost her job in the middle of 2017, we went on the COBRA plan for the second half of the year. The premium was a staggering $1,875 per month. That was much higher than our house payment, and would likely be even higher now.

What many don?t understand about COBRA is that it represents the unsubsidized premium on your employer health insurance. That means if the actual cost of the premium is $1,500, but your employer pays 60%, your portion will be a relatively affordable $600 per month.

But lose your job, and the entire premium is on you. And that’s not all. The plan administrator can add up to 15% to the premium as an administrative fee. That means your actual COBRA payment will be $1,725 per month. Imagine trying to afford that payment when you?re unemployed?!?!

What about ACA plans?

I ran a scenario on the ACA plan estimator site to get some premium quotes. The fictitious profile is of a 40-year old couple with two dependent children, and an annual income of $80,000, living in the Atlanta metropolitan area. This is what turned up: 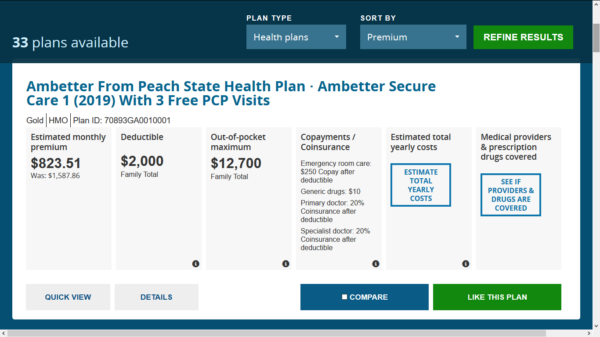 33 plans came up, some with lower premiums. The cheapest had a monthly premium of $245, but it also had a deductible of $13,500. That kind of deductible is unacceptably high, particularly if one of the breadwinners is unemployed. In today’s high cost healthcare universe, reaching $13,500 isn’t even hard.

But look to the right of the deductible, where it references $12,700 for the out-of-pocket maximum. This number should never be ignored. It reflects a 20% coinsurance provision. That’s the part of a medical bill that will be your responsibility over and above the deductible.

The bottom line is that neither COBRA nor ACA are workable solutions if you lose your job.

Unfortunately, there are no simple solutions to this problem. That?s because it?s a system, and a largely failed system at that.

Choosing to Go Without Health Insurance ? Are there Alternatives?

As much as I’d love to say there?s a super-secret solution to this problem, there isn’t. There are strategies, but each requires accepting trade-offs.

Again, none of these strategies are perfect. But with the current state of health insurance, there are no perfect plans.

Do you have a strategy in place in case you lose your coverage?

32 Responses to Choosing to Go Without Health Insurance