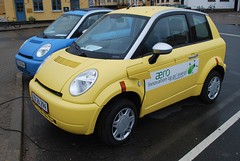 With gasoline hovering ever so close to the $4 mark (premium is already there!) who doesn?t think fuel economy matters? After we?ve done all we can do to cut back on our gasoline consumption?consolidating trips, tuning up the car, maintaining proper tire pressure levels and even slowing down a bit when we drive?we?re still left with the inescapable fact we have to drive to work and survive. And that means we need gas, lots of it.

Long term the biggest factor affecting fuel economy is the type of car we drive. We can?t make a car that gets 15 miles per gallon suddenly get 30, so the ultimate solution is to replace the gas guzzler and go with a more fuel efficient vehicle.

Electric cars represent the ultimate solution. A car that runs 100% on electricity means freedom from gas prices, and even from disruptions in gas supplies. All you need to do to power them up is plug them into a wall socket at home, let them charge and you?re good to go.

Sounds perfect, right? Not exactly. Electric cars can go barely 100 miles between charges?and that?s when they?re brand new. The scuttlebutt is that the batteries quickly degrade, and actual mileage between charges is substantially less, like closer to 50 miles. There is no backup power system, so when the battery drains, you?re stuck where ever it happens.

If you work from home, are retired or work very close to home, an electric car may work for you. For everyone else, it won?t. And it will never do a long trip for anyone. Electric cars will have their day, but it looks like that won?t be for a while.

Hybrids are a step up. The can run on electricity, but switch to gas as a back up, or in driving conditions where electric power isn?t optimal. As good as that sounds, it?s not a perfect situation either. There are three problems with hybrids: 1) price, 2) continued reliance on gasoline, and 3) while hybrid MPG is substantially better than for the average car, it isn?t radically better than other less expensive alternatives.

The Toyota Prius is the current standard of hybrid cars. The 2011 version lists at a base price of about $29,000, and gets about 42 miles per gallon.

That?s a rich price for what is essentially an economy car and MPG that?s hardly a radical step up from the most fuel efficient gas-powered cars. Meanwhile, gasoline is still a critical component of it?s power. And it would seem that fuel efficiency would be degraded still further due by the weight of the batteries during times when the car is running on gasoline only.

The basic problem even with high MPG gas-powered cars is that they rely entirely on gas. Beyond that however, the advantages stack up favorably?not only on mileage efficiency, but more particularly with price.

An article on Yahoo Autos, For non-electric, non-hybrid cars, 40 is the new 30 (mpg) provides a list of six cars that are getting at least 40 miles per gallon:

The article lists five additional gas-powered vehicles that are not yet available, but coming soon and provide comparable fuel efficiency at similar vehicle cost.

Note that with each car, the MPG is comparable with that of the Prius, but the cost of the cars themselves is substantially less in each case. The Elantra is priced at less than half the Prius and virtually every one of the other cars is at least $10,000 less.

It?s not hard for any of us to drive 50 miles or more in a single day, nor is 100 miles out of the question. Even if you only average 20-30 miles per day, a phone call can require us to double that, jeopardizing the ability to get home before the battery dies. For that reason electric cars will impose real restrictions on driving flexibility.

100% electric powered cars are definitely worth waiting for, but they aren?t for now, not for most people.

As to hybrid cars, while I can see the value in having an electric power source for a car?mostly for gas supply disruptions?I don?t see the advantage of paying an extra $10,000 (or more) to have it. As well, the wider variety of gas-powered economy cars means we have far greater choice in vehicle selection.

Love ?em or hate ?em, high MPG gas powered cars represent the fuel efficiency cutting edge. They may be the last of their generation before a new wave of high charge electrics come on the market, but at the moment they produce the greatest fuel efficiency for the price paid.

That may change in five or ten years, but by then you?ll probably be back in the new car market, this debate will be over and the all-electrics will be the way to go.