Home › Careers, The Economy › Here’s Why You Can’t Get a Job or a Promotion

If you’ve been having difficulty finding work, or thriving in your current position, there are big picture factors that are playing a huge role. Though the government, economists, and even the mainstream media try to make it look like it’s all your fault (not enough education, wrong skillsets, not enough motivation, etc.), there’s a lot more going on than meets the eye. The entire nature of the economy is changing, and it has a major impact on why you can’t get a job or a promotion.

Let’s start at the top. The corporate world has been shrinking for nearly 20 years. And not just a little.

The Wilshire 5000 is generally regarded as the broadest measure of US stocks since it encompasses virtually the entire market. But the count of 5,000, which represents the starting point of the index in 1974, has varied considerably since.

According to the website, the Wilshire 5000 Total Market Index peaked out at 7,562 companies as of December 31, 1998. That makes complete sense, since it was just about the top of the Dot-Com Bubble, and perhaps the strongest job market in US history.

The reason why there are no longer 7,500+ stocks in the index – or even 5,000 as the name implies – is because there simply aren’t that many publicly traded corporations left in the US.

We can speculate as to why the number of companies has fallen so dramatically. Two severe recessions – the Dot-com Bust and the Financial Meltdown – have certainly taken their toll. But we should also suspect that the explosion in the number of mergers and acquisitions over the past 20 years have also played an important role.

The reduction in the number of large companies, in concert with the sustained efforts of the remaining companies to pare down their payrolls, is a major contributor to the tough job market. It’s all about supply and demand – too many candidates chasing too few positions at a declining number of potential employers.

That competition not only makes jobs hard to find, but promotions too.

The collapse in the number of publicly traded companies wouldn’t be nearly so bad had we experienced a boom in the number of small business formations as larger companies either shrunk or disappeared. But that didn’t happen either.

The following chart indicates that the number of new businesses established took off in the 90s, slowed in the early 2000’s, and then fell off a cliff during and since the last recession. Notice that the number of formations peaked in 2005, dropped in both 2006 and 2007 – years which we were similarly told were growth years – then plummeting in 2008. By 2009 there was a sharp contraction in the number of small businesses. That contraction continued in 2010 and 2011, before managing an anemic expansion in 2012, then dropping off again in 2013. 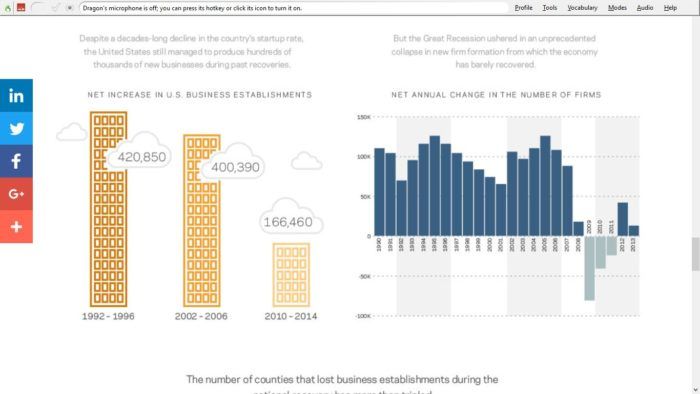 Normally, the number of new business formations swells in the early years of economic expansions. But that didn’t happen in this business cycle, considering that the economy left the last recession in 2009, at least according to official sources.

That hasn’t happened in this recovery. Part of that is because the nature of the economy has changed. The big box retailers, chain pharmacies and fast food conglomerates of the world have gradually displaced millions of small businesses, including hardware stores, auto repair shops, privately owned pharmacies, coffee houses, delicatessens, movie theaters and clothing shops. There simply are fewer traditional business opportunities available to small entrepreneurs.

In addition, there are many instances in which large conglomerates buy up very successful small businesses, ultimately raising prices and cutting jobs in the process. We had this happen when our highly efficient, incredibly cost-effective, local trash hauler was bought out by a well-known national concern.

It seems that large companies have found that it’s easier and cheaper to buy new customers by buying out competitors, than to generate increased organic sales. It’s happening all across the economy, and eliminating small, locally owned and operated businesses.

A large company can buyout or replace 50 small businesses that employ perhaps 300 people. And by using a big-box facility, they can run their operation with half as many people.

And the other half? Some will retool into new careers, but many will be forced into either underemployment or early retirement.

The Economy is Weaker than Reported: Macy’s Announces a Major Store Closing Campaign

Last week, department store giant Macy’s announced that it’s closing 100 of its stores That’s not trimming around the edges. It’s roughly 15% of its full-line store total of 675.

The company reported it this way:

“…the company intends to close approximately 100 Macy?s full-line stores (out of a current portfolio of 728 Macy?s stores, including 675 full-line locations). Most of these stores will close early in 2017, with the balance closing as leases and certain operating covenants expire or are amended or waived. In a number of cases, stores will be closed as the value of the real estate exceeds their value to Macy?s as a retail store. The locations of the 100 stores to be closed will be announced at a later date, once the company makes final decisions…”

This is not a minor development. Macy’s is probably the most iconic department store chain in the country, and a bellwether for the entire retail industry. And the retail industry very much represents the pulse of the whole US economy. If retail is declining, it’s a sure sign of weakening in the general economy.

In an interesting turn of events, JC Penney seems to be benefitting from the Macy’s closures. But lest anyone think that Penney’s is growing like gangbusters, the trend seems to be mostly keeping the company afloat more than anything else. They have been reporting flat sales and also have been closing stores, despite the vacuums left by the prior closings of 90 Macy’s stores in the past six years.

In fact, it would be hard to find any area of retail – other than online – that isn’t in some phase of consolidation, if not outright decline. Like the decline in publicly listed companies and the lack of growth in new small business formations, this is having a deep affect on the job market. This is also when it’s important to remember that retail represents a major point of entry to the job market by millions of people.

The Walmart and Amazon Effects

Now optimists will say that the decline of major department stores is the result of a change in consumer behavior, not a decline in the economy. They’ll point to the impact of the success of big box discounter Walmart – as well as the rapid growth in sales by Amazon – as the real culprits.

There’s definitely some truth to those claims, but it’s exaggerated nonetheless. Let’s drill down a bit deeper…

The Walmart explanation is highly suspect, since it’s a giant discount chain that appeals to an entirely different customer base than Macy’s and its competitors. And if it’s true that people who once shopped at Macy’s are now shopping at Walmart, this would only confirm the declining economy theory. People are trading down on their shopping habits because they have less money to spend.

Meanwhile, Amazon has been building a cyber empire capturing customers from brick-and-mortar retailers. Amazon isn’t so much developing an organic customer base as much as they’re pulling business away from established retailers by using lower prices. This indicates more of a changing of the guard than it does actual growth in retail sales. And there’s a major negative in the mix on the employment front here.

That means that Amazon generates nearly three times the level of sales per employee. In the final analysis, that shows how the new trend in retailing is moving toward greater production but with fewer employees.

The moral of the story is that online sales requires fewer employees than brick-and-mortar retailers. And even that understates the problem, since brick-and-mortar stores generate jobs in other areas, such as new construction, the purchase of fixtures and equipment, building maintenance, and the payment of property taxes, utilities and insurance.

If there’s a shift toward online sales, it is a negative for employment.

And All of This is Happening in a “Growing Economy” – Really???

One more observation on the Macy’s store closings…the 90 stores closed in the past six years, plus the 100 announced future closings, represent about 25% of the Macy’s empire being shuttered since 2010. That’s a timeframe over which we’ve been told has been a period of economic expansion.

Isn’t it supposed to be that recessions cull the economic dead wood, while the rising tide of expansion “lifts all boats”? What we’ve been seeing then is not so much a general economic expansion over the past few years, but rather a zero-sum game in which some businesses grow, while others continue to contract and even to go out of business (like Sports Authority). For the losers, it’s like a permanent state of recession.

I think this zero-sum game narrative is well supported by both the decline in the number of public companies and the stagnation of small business formations. We’re into an economy in which the primary means of growth is to draw customers and revenue away from other businesses. The pie isn’t getting bigger, but rather the occupants of the pie are surviving by feeding off each other.

And the winners are winning with fewer employees.

The net effect is a permanently weaker job outlook, even during reported expansions. This is true no matter what the official statistics on unemployment show (in addition to the fact that the official statistics are almost certainly grossly overly optimistic). And also on what those statistics don’t show – that many of the jobs are part-time, that career ceilings are more common and are happening sooner, and that it’s getting progressively more difficult to earn a living wage.

The “experts” are telling us that the solution is more economic growth and more worker education. However, it’s pretty obvious that that tandem hasn’t been working in the past few years. We also have to consider that employment difficulties have continued into what is commonly described as an economic expansion. That means that we can expect the negatives to accelerate once the economy begins to turn down officially.

So what can you do about it if you’re struggling to either find a job, advance in your career, or just remain employed?

I think you start by ignoring the common official explanations of what’s happening in both the economy and the job market. Something is amiss, and the people who should be in a position to know better are either too well insulated from reality, or they fear to report it.

We should assume that the current trend ? which has actually been in place for close to 20 years now ? is probably the new normal. That means changing attitudes and actions in regard to career, financial lifestyle, and the economy.

Here are some strategies along that line:

It’s not the 1950s and 1960s anymore, and it’s certainly not the 1990s by any stretch of the imagination. We?re in the midst of a very different economy and job market than anyone even wants to acknowledge to exist. But it’s happening all around us ? will you be prepared?