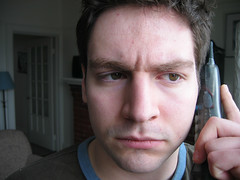 The economy and the job market are finally showing signs of life. Unfortunately, debt problems are cumulative in nature and often take years to work out. In the process, many are dealing with an unwelcome semi-professional: the debt collector.

Now, when you?ve been through tough times you?re already off balance. The loss of a job or a home is enough to take a big chunk out of anyone?s confidence. But a call?or more likely a series of them?from one or more debt collectors can finish off what?s left of anyone?s self-esteem.

I know a thing or two about the collection process from my time in the mortgage business, but for this post I decided to enlist the support of David Kelly, professional speaker, contributing writer here at OutOfYourRut.com, and one of my very best friends. In addition to these attributes however, Dave was also in the debt collection business a few years back, and has useful advice from the inside.

If debt collectors are hounding you, here?s some of that advice that might help you.

Know your rights. Familiarize yourself with the Fair Debt Collections Practices Act (FDCPA) published by the Fair Trade Commission. It provides specifics on what a creditor can and can?t do?legally?in an attempt to collect on a debt. Knowledge is power?know the law better than the debt collector! Most will assume you don?t; surprise them!

Don?t be intimidated. They can?t put you in jail for not paying your debts. For one thing, there is no debtor?s prison, and for another, the collector is prohibited by law from threatening you. But that doesn?t mean they won?t try! Also remember that the collector isn?t your boss, a court judge or a police officer?he?s a person attempting to collect a debt and little more. Most likely, he?s working on some sort of commission arrangement which explains his passion more than anything else.

Make the debt collector respect you. When you owe a debt that you can?t pay, it?s natural to feel as though you?re dealing from a position of weakness. Debt collectors know that too, and many will take full advantage. Even though they may not directly threaten you, they may do it more subtlety by talking down to you, or using other demeaning tactics. Knowing the law will help immeasurably but you can also take the upper hand by speaking in a strong voice, directly to the collector as though you?re negotiating a business deal. If necessary, insist that he address you as ?Mr.?, ?Mrs.?, or what ever salutation you prefer. And remember that your inability to pay a debt, while unfortunate, is NOT a crime.

Don?t answer your phone. Dave says collection calls are why God gave us voice mail. Seriously though, if you can?t pay a debt and a collector has your phone number, he will probably badger you constantly for payment. If you don?t have the money to pay, there?s no point even speaking with him, and the best way to avoid it is by not picking up the phone. Don?t bother changing your number, they have ways of getting the new one. One more thing?if you let his calls go to voice mail, don?t waste your time listening to them?that?s what the delete button is for. You don?t need the stress he?s serving up.

NEVER commit to a deadline or dollar figure. Please re-read that heading?it?s critically important. Collectors will try to get you to do exactly that, and for good reason. They will often tape their conversations with you, which you should assume to be the case even if they don?t tell you. One of the collector?s legitimate weapons is using your unfulfilled promises as evidence that you aren?t ?acting in good faith??that?s something he can bring before a judge. Never promise to send money by a certain date in an attempt to make him go away. Yes, he will stop bothering you, but only until the deadline passes and then he?ll be back on your case even if you do send money?he?ll be looking for more and the cycle starts all over.

Everything is negotiable. And that includes the debts the collector is trying to make you pay! When you are in a position to pay the debt, offer less, even much less. You may be able to settle your debt for pennies on the dollar! Here?s why: the collector doesn?t get paid until you send money. He?s got bills to pay too, and may even have a collector or two on his butt; for that reason most of the time they?ll accept a settlement in lieu of full payment.

NEVER send money without first getting a written agreement. This is important any time you send money to a collector but it?s absolutely critical if you offer less than the listed balance as full settlement! If the debt is $5000, but the collector agrees to accept $3000, don?t send any money until you a) have the money to pay the agreed upon amount (absolutely NO partial payments at this point), and b) the collector has sent you a written confirmation agreeing to accept the reduced amount as FULL payment of the debt. The confirmation should include ALL of the following:

Important: Once you have the letter and it?s satisfactory, you must make payment by the agreed upon date and for the full amount agreed upon. A late payment or partial payment will be accepted, but if the collector wants to get ugly, he can claim that the agreement was not complied with and is therefore invalid. Send payment by overnight courier or by wire if possible, that way there?s no possibility of missing the due date.

You will need this letter to send to the credit repositories; lenders are required to do this, but they don?t always. Keep the letter in a safe place for a long time?it?s your best protection against ?misunderstandings?, especially the ones that end up in court.

It?s in your best interest to be proactive about paying past due debts, but you don?t need to be bullied in the process. If you have doubts, or you?re dealing with a collector who?s especially aggressive, consult with an attorney to discuss your options. You always have them.

Have you ever had the displeasure of dealing with debt collectors? How did you handle it? What advice would you give to someone who?s dealing with one now?