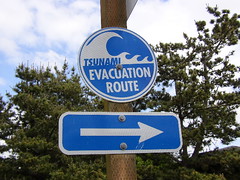 After the briefest of pauses, the stock market is back to swinging back and forth and showing no clear direction either way–Europe-itis is to blame once more. On Friday the European Union was assuring the world that it had matters well in hand?by Monday the world was back to not believing any of it. The global markets responded accordingly by whipsawing back and forth.

As much as we might wish otherwise, the signs are screaming out for of more of the same. Rising stock markets are based on calm and predictability, and both are in short supply?hence the volatility. And volatile markets typically settle in unhappy places. Consider the large stock slides in 2000-2002 and again in 2007-2009; I believe we?re at just such a point again today. Where this run ends is anyone?s guess, but there?s enough uncertainty out there to support an argument for just about any scenario we can imagine?and most of them are bad for our finances.

DISCLAIMER: I?m not an investment expert, nor do I write often about specific investment strategies. As a ?certified outsider??I don?t work in an investment related capacity, don?t stand to gain from a bear market and am not out to sell you anything?this is just the opinion of a peon. But sometimes peon status gives you the ability to see what insiders don?t, won?t or can?t. As a peon, I have no agenda!

That said, I offer my opinions on the current state of the investment universe, and steps we can take that might minimize the damage that I think is coming.

The equity markets have been largely supported by historically low interest rates. After all, why put money in interest bearing investments when the rate of return on them is less than 1%? If these were normal times, that thinking would make abundant sense but the times are anything but normal.

Now is the time to ignore the low interest rate issue, and load up on cash investments. We?re not looking for return with cash, we?re looking to use it to 1) lower our exposure to risk investments and 2) to have funds available to buy up stocks at bargain basement prices once the market hits bottom. Think of holding cash as ?keeping your powder dry??when you put it in those terms it sounds a lot more on the edge.

Cash represents liquidity, and the time to build it is when investment prices are relatively high. Liquidity will only be harder to come by once stocks start to fall in earnest.

Investors often use bonds as either a way to achieve higher rates of return in a low rate environment, or?because of the inverse relationship between interest rates and bond prices?as a way to capitalize on still lower rates in the future.

On the first point?looking for higher returns?the only way to get higher returns in a low rate environment is either by extending the term of the securities, or by accepting those of lower quality. Both strategies add risk to your portfolio at a time of increased overall volatility.

As to the second point?capitalizing on still lower rates–since interest rates are now at record lows, the likelihood of them going still lower looks like a sucker?s bet. If anything, volatility will magnify those risks causing you to lose money on your bonds.

In the current economic climate and interest rate environment, bonds may be only slightly less risky than stocks (maybe). This includes not only corporate bonds, but also municipals and foreign government bonds. All carry increased risk, and as we?re now seeing in Europe, many governments are at risk of outright default. That?s not a diversification from stocks in any sense of the term.

If you?re looking for longer maturities with complete safety, consider US Treasury securities. You can purchase Treasury Notes (terms from two to ten years) or Treasury Bonds (terms up to 30 years). Both offer rates higher than short term securities, but the notes carry far less risk in the event of an increase in interest rates (a bond trader once told me that a bond with a term of 20 years or more is no better than owning a stock!). Corporations and states can default on their bonds, but since the U.S. Government has the power of the printing press, one way or another you?ll always get paid!

You can buy U.S. Treasury Securities through brokerage firms or through Treasury Direct in denominations as little as $100. This is probably the only safe ?bond play? in a volatile market.

I?m personally of the opinion that high price markets accompanied by high volatility are prime candidates for a quick exit, but I?m also aware that many people don?t agree with that thinking. So for the benefits of those who believe that stocks hold a place in any investment environment, here are a few thoughts.

Rob Bennett has written on this site that he?s been out of the stock market since 1996 and I completely agree with him. I?ve been out for most of that time as well. The same ultra low interest rates that have driven the equity markets to insane levels are also the prime force behind the worldwide explosion of debt since about the same time?hence the debt crisis.

Now that interest rates have hit bottom, a major re-alignment is playing out. Yet stocks remain at the upper end of their all time trading range! There?s a disconnect here, but I think it?s about to be resolved in a way that will make most investors quite uncomfortable. I think the only reasonable plays in the market will be special situations, one of which is dividend stocks.

Dividends can not only provide a cash flow that helps you to survive a major market decline, but they also can put a floor on the price of a stock. Even if the price of the stock falls in a market slide, dividend paying stocks will be prime candidates to be scooped up by bottom feeders looking for bargains and thus more likely to recover quickly.

Dividend stocks are some of the best investments in any market, but especially in volatile ones. Dividend Stocks Online specializes in high yield dividend stocks and is a good place to start looking for high paying stocks.

Another special situation in stocks is value stocks. These are stocks that for one reason or another have fallen out of favor with the markets, and so their prices trade at low levels relative to earnings, book value or even companies in the same industry. Sometimes entire sectors fall out of favor. In bull markets, value stocks don?t hold much appeal, but in bear markets they begin to stand out. This is often because bear markets bring a changing of the guard?a new ?Nifty Fifty? if you will.

Value stocks are often prime candidates for bottom feeders. In bull markets, everyone is looking for high performers; in bear markets when few stocks are performing, underperformers with good fundamentals suddenly come back in demand.

Still whether we move into dividend paying stocks or value stocks, now is the time to lower our equity holdings, preferably to minority positions. The less we have in stocks, the less we have to lose.

Be ready to ?bottom feed?

I?ve mentioned ?bottom feeders? a couple of times in this post and for good reason: that?s precisely what I think we need to be preparing ourselves to be in the coming months!

The whole point of moving into cash and treasuries and lower risk stocks is to be ready with the cash AFTER stocks drop substantially in price. It?s a matter of positioning ourselves as bear market beneficiaries?able to buy stocks at bargain prices. And when we do, dividend and value stocks should be high on the ?buy list?.

Where do you think the financial markets are heading, and what are you doing to prepare for it?

4 Responses to Investing in Volatile Markets