Home › Commentary › Is the American Dream Dead now that Housing is in the Tank?

The American Dream ? what it is, and what it isn?t 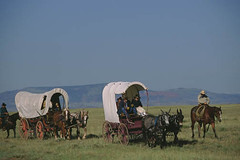 There?s a growing perception that the famed ?American Dream? is dead. You see it written about, discussed in the media, and books on the subject are even coming out. The housing industry has collapsed, sucking out economic activity, jobs, home equity and even mobility.

Housing is, after all, very essense of the American Dream–or is it?

Writer and historian James Truslow Adams, the man who coined the term “American Dream” in his book The Epic of America, written in the depths of the Great Depression in 1931, had a rather different concept. He defined it as?

“?that dream of a land in which life should be better and richer and fuller for everyone, with opportunity for each according to ability or achievement…It is not a dream of motor cars and high wages merely, but a dream of social order in which each man and each woman shall be able to attain to the fullest stature of which they are innately capable, and be recognized by others for what they are, regardless of the fortuitous circumstances of birth or position.”

Where is housing in all of that?

Notice that no where in that definition does a house in the suburbs with a white picket fence come up. So where did we get the notion that it ever did? Congratulations to the real estate industry on a magnificently successful highjack of the famous theme! Ahh, the power of marketing?you really have to hand it to them.

Except for one thing: their one-dimensional definition is completely wrong!

Other than an incidental (and negative) mention of ?motor cars?, Adams description doesn?t even include the STUFF we seem to hold so near and dear, let alone a house in the suburbs. His focus instead centers on the environment that spawned the dream–opportunity, a social order in which people are able to become the best they can be and where they can be recognized for their accomplishments

Do you see any stuff in that?

Since the real estate industry seized the concept of the American Dream wholesale, I?d like to forward my own notions of what it means. I believe we can live the American Dream?in America?and in many other places in the world, even if we never own our own piece of ground.

Opportunity. More than any other single factor, this is at the heart of Adam?s description. Even if we aren?t where we want to be in life, if we don?t have the trappings of success we might think we deserve, we have a chance to get there. The reasonable hope for a better life by itself is a form of currency ?a driver in our economy?in the economy of any nation.

Ability to earn more money. What about the ability to earn more money by getting a better job, improving our skills, starting a business or through any number of channels? Obviously this is more easily accomplished in a more robust economy than we now have, but it?s something we can pursue and attain even if we never have a house in the suburbs.

Having your own business. This is my personal favorite. I?ve always believed that the ability/potential/promise to be your own boss is the most fundamental component of the American Dream. It represents a chance at complete self-determination, something which I believe is an innate human desire.

Freedom to pursue your own definition of success. One of the most attractive aspects of the American Dream is the potential to decide for ourselves what our idea of success is and to pursue it at our own pace and in our own time. It?s what?s drawn immigrants to this country and continues to do so even now. America has traditionally been a place where a person could come and seek success in a world unencumbered by a strict caste system.

Perhaps we?ve lost some of this concept because we?ve become more fascinated with the nanny state and its implied potential to soften the rough edges of life. Perhaps it?s because we?ve come to a point where we?re confusing stuff?the trappings of success?with success itself. But what ever our distortions, that freedom to pursue success is far more important than what ever it is that has us sidetracked.

Ability to innovate. Who doesn?t dream, at least occasionally, of the ability to ?build a better mousetrap?? Let?s face if, doing so could enable you to lock into several components of the American Dream at once. Innovation is our own personal way of leaving our mark on the world. Even if we don?t ever make a fortune, we can still do things that will make a difference to others.
So there you have it; no house in the suburbs, no trading up to a bigger one every five years. But still plenty to go on, still more than enough room to give us fulfilling lives, even the lives of our dreams. Are we going to let a housing slump hold us back? Is it possible that once we lessen our dependence on credit and the stuff that it buys, that we?ll actually have more freedom to pursue the American Dream?

What do you think? Is the American Dream still alive and well, or is it on life support? How would you define it?

13 Responses to Is the American Dream Dead now that Housing is in the Tank?