I?ve always been someone who enjoys looking at maps, charts, and graphs. They give visual pictures of what’s going on and help us to see what we don’t normally see, like the big economic picture.

Catherine Mulbrandon has a fascinating website, VisualizingEconomics.com, where she presents sometimes complex economic data in an easier-to-understand visual format. Want to know how much the average worker makes based on their occupation and education level? Mulbrandon illustrates with a very colorful example: 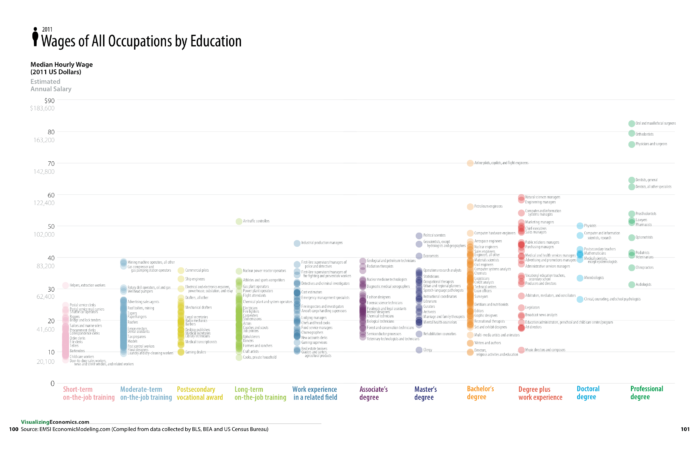 Obviously, the higher the worker?s education, the higher their income is likely to be. That doesn?t necessarily mean you?re condemned to a life of poverty is you don?t have multiple degrees ? you can see there is still a diverse spread in the ?less education? categories. In fact, the percentage of American workers with advanced and/or professional degrees is actually fairly small, based on the next chart.

One thing that is interesting to note, however, is that those with lower-paying jobs with fewer educational requirements may have to ?keep on their toes? more often with their vocations. The job market is proving to be more volatile for those on the lower rungs. Note how from 2001 to 2011 there already was a decline for cashiers and retail salespeople, and with all kinds of talk in the news lately about the coming ?retail apocalypse,? there?s no telling what may happen in the next few years.

Mulbrandon isn?t the only one who has put together stunning visuals to show the current state of our economy. Andrew Van Dam and Renee Lightner of The Wall Street Journal have put together an interactive map showing which sectors of the economy gained and lost jobs from 2008 to the present. (Source: Track National Unemployment, Job Gains and Job Losses.)

Interesting to note that during the 2008 recession, the industries that got hit particularly hard were mining and logging, construction, and durable goods manufacturing ? though as of March, 2017, all these industries are again in positive territory.

As many of you know, consumer spending is the primary driving force of our economy. HowMuch.net has another graph on how Americans have typically spent their money over the last 75 years:

Americans continue to spend more than ever on health care, education, and housing, while food and clothing expenditures have seen substantial declines. Some have argued, however, that the quality of our food and our clothing have gone down during this time frame as well.

Want to see where everything (well, almost everything) goes with the average American paycheck? The Department of Labor has a comprehensive list:

As you can see, daily life in the United States can get pretty expensive, although there are numerous ways one can pare down their expenditures.

What about you, readers? What other interesting economic data have you come across?