Home › Self-employment › Self-Employment and Being Frugal? Is There a Connection? 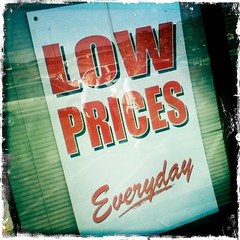 In previous posts I?ve suggested that frugality can be counter productive if it keeps you hyper-focused on saving money at the expense of increasing your income. There is a very definite ?siege mentality? that is inherent in frugality, and if taken too far it can lead to a process in which you?re constantly working to lower your cost of living but never moving forward in any real way.

Today I?d like to look at the flip side of this thinking. In this post I?d like to examine an area where properly channeled frugality can create business opportunities.

Last week I had lunch with my friend Jay and we got to talking about the possibility of a connection between self-employment and being frugal. Jay himself was the inspiration for the question?and for this post. In addition to having a very successful business, one he quite literally built from the ground up, Jay has never held a job. His entire career has been a process of moving from one entrepreneurial venture to another and sometimes juggling two or more at the same time. Oh, and yes, Jay is also very frugal. I don?t mean cheapskate frugal, but more along the line that frugality is a part of who he is.

Have you ever known anyone like this? I?ve known several. Make that many! That?s what leads me to believe that there might be a connection between self-employment and frugality. I?m not sure whether frugality sets the stage for self-employment, or if being self-employed makes one frugal out of necessity. But I?m willing to guess that there are certain characteristics of the frugal that make it easier for them to be self-employed.

What are those characteristics?

An inclination to find the best deals

What ever it is that a frugal person needs he?ll almost always pay less for it than others will. In that process he develops a sense to be able to almost sniff out the best deals on nearly every product or service he buys. A truly frugal person almost never buys ?off the shelf?. He hones something of a horse trader?s instinct that he?s able to summon anytime he?s about to buy something. Think of it as buying wholesale, a skill that any self-employed person needs to develop.

The inclination to find the best deals is rooted in a deep sense of value. The frugal person knows that what it is he buys is purchased at a lower cost than what most others are willing to pay. This sets the stage to sell what he buys for a profit. The primary ?secret? of having a successful business is the ability to buy on the cheap and sell what you buy at a higher price. It?s easy to see how this would help in running a business.

Getting the most out of scarce resources

The frugal not only know how to buy for less, but they also have an uncanny ability to use what they have to the fullest. That may involve using a product past the point where most others would discard it, the willingness to fix or otherwise enhance it to get more life out of it or, failing all else, to find cheaper alternatives.

This is exactly what you?re doing when you?re self-employed. There are business plans, but as anyone who?s ever run a business knows, improvising quickly becomes the order of the day. Since income is never unlimited, the ability to make do with less becomes the critical ?other half? of business success.

Since a frugal minded person is always aware of expenses and the need to control them, his ability to successfully manage cash flow tends to be better than that of the average person. We can see how this is a benefit in managing personal finances, but it works just as well in running a business budget. By keeping expenses low, and buying only what?s absolutely necessary, the frugal person also maximizes net income.

Staying out of debt

Frugal people are keenly aware that debt and the interest it carries raise the cost of everything it?s used to buy. For this reason, the frugal avoid debt and that works very well if you run a small business. Debt can be the mortal enemy of a business entity, reducing options and cash flow during downturns. By staying out of debt, a business is in a better position to weather economic troubles. The frugal tend to be naturally better at making this happen.

One of the hallmarks of the frugal is a healthy savings account balance?a natural result of buying on the cheap, keeping expenses low and staying out of debt. This is also a benefit to a business owner since it keeps cash available for future investment. This can be either investment in personal financial assets or investment in the business itself.

Where ever it?s done, when a business owner is able to invest without borrowing he improves the likelihood of both the survival and increased prosperity of his business.

Getting back to the question in the title: Self-Employment and Being Frugal ? Is there a Connection? In my opinion, most definitely.

What do you think? Is there a connection between the two? Does frugality benefit a business owner? Can you think of ways it might work against being self-employed?

( Photo from Flickr by _tar0_ )
Tweet13
Share
Share
13 Shares
← ?I Don?t Think I?ve Ever Heard Buy-and-Hold Described as a Get Rich Quick Scheme Before?
Every Stock Investor Experiences One 20-Year Period of Poor Returns →

4 Responses to Self-Employment and Being Frugal? Is There a Connection?