Home › Commentary › Starbucks, Blockbuster and Friday Round Up June 25 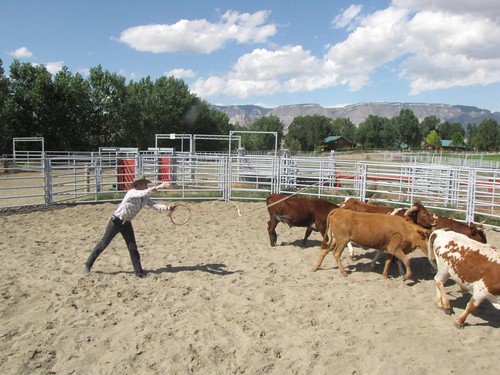 Random musings from this week?

Free Wi-Fi at Starbucks but you have to sign up 6700 Starbucks coffee shops are rolling out free Wi-Fi beginning July 1st. Don?t tell anybody, but you can sign up right now and get the free service immediately. I took advantage of the change late last week, and though the service is free, you do have to go through a fairly cumbersome sign up process. You have to purchase a Starbucks gift card (minimum $5) to get the card number and activation code, which become part of your permanent entry codes. A pamphlet is available to walk you through the process, which is establishing a Wi-Fi account through AT&T. One tail though?the free service is limited to two hours per session, after which charges will apply. Still, that?s a minor limitation in exchange for having access to free internet at thousands of outlets.

Healthy snacks. When we take our family to the movies, we stop at a store and buy any candy that we want, since the same stuff they sell for $3.50 to $6.00 at the movies can easily be had for about a dollar a box on the outside. Walgreens is offering a new and healthy twist: right there with the movie sized candy boxes are snack sized boxes of dried fruit.

Wow, snacks that look almost like junk food but are actually good for you. On my last trip in a got a box of raisins for a dollar?and somehow it just tastes better coming out of one of those candy sized boxes. Whoodda thought? I guess someone did?brilliant idea!

Is alternative energy impossible? In light of BP?s Gulf oil crisis?we often hear that alternative energy is impractical, unworkable, too costly, and too far into the future to help us now. Yet Denmark has been making quiet but steady progress in generating electricity from windmills, most of them privately owned. Despite being oil rich, Denmark now generates nearly 20% of its electric power from windmills. It?s something to think about as crude gushes into the Gulf of Mexico or the next time oil/gasoline prices spike to uncomfortable levels?

All good things come to an end, and so has Blockbusters No Late Fee policy This may not come as news to some people, but Blockbuster has quietly ended their much celebrated no-late fee policy. We don?t rent videos often, but did a week or so ago, and found that they?re back to their get-it-back-within-five-days-or-else policy. It was nice while it lasted, but we won?t be renting too many movies there from now on?once we?ve watched them a couple of times we kind of forget we have them?

Save your left over coffee! I left the following comment on a post at Provident Planning this week, but didn?t realize at the time that it might represent money saving advice:

?Any iced coffee drinkers out there? I save our left over coffee, refrigerate it, then mix with milk and an artificial sweetener and it?s superb! It?s also been recently reported to be an effective appetite suppressant?that never hurts.?

A heartfelt thanks to Len Penzo for inviting me to post on his site this week while he?s away on vacation (Behind the Green Curtain: An Insider’s View of the Millionaire Mind, Monday, June 21). Len is one of THE most creative writers in the blogosphere, and it was a real kick not only to do the post, but also to participate in the rich commentary that follows on his site.

Brad at Enemy of Debt created quite a stir this week with his on-the-edge post The Cold Hard Truth: Debt is STUPID and You Might Be Too!!. While I think there are compelling reasons people go into debt that are outside the preserve of semi-permanent insanity, sometimes we need someone with the intensity of a drill sergeant to get our attention. Mission accomplished!

Jason at Redeeming Riches takes on a subject that is the source of great tension for most Christians, the dividing line between faith and money–there shouldn?t be any! In How to Live Missionally With Your Money he provides a careful analysis of why everything, including your finances, should be handled within the framework of faith and not the other way around.

Paul at Provident Planning is doing his part to bring us home to the simple pleasures of summer in Sweet Tea: A Cheap Alternative to Soft Drinks but Tastier than Water. Despite his passion for sweet tea, there?s a strong financial message in the post. How much money do we spend each year keeping ourselves supplied with soft drinks? How much can we save if we substitute our own home prepared beverages compared to the cost of buying popular soft drinks off the shelf? There?s some real money to be saved over the course of a year with this simple do-it-yourself (recipe provided!). And the mason jars DO add a nice twist.

A site coming up that?s well worth paying closer attention to is KNS Financial. Khaleef from my home state of New Jersey has a two part series this week Trying to Reduce Expenses? Sweat the Big Stuff! on major expense reduction, including Car Costs and Cell Phones & Utilities. We can only clip so many coupons and recycle so much stuff, but the real savings are going to come when we take a look at the bigger expenses and start chopping there. Car costs are one of my favorite targets, as anyone who?s read a few of my posts knows.

Peter at Bible Money Matters offers one of the most comprehensive posts I?ve ever read on the costs of having a baby in What Expenses Should I Expect When Having A Child?. It?s a subject close to his heart as he and his wife await the arrival of their new baby boy. Having had two myself (well, my wife helped) it?s obvious he?s done some extensive research on what to expect, and I?d recommend the post to anyone who has a baby on the way or plans for one in the near future.

Sometimes the simplest things have the greatest impact on our lives. Kevin at Financially Poor introduces a single one word question (from youth) that might eliminate the need for all of the will power you never had in This 1 Question Will Change Your Spending Habits. He speculates that the perceived need to spend money is often driven by deep emotional issues that can be successfully challenged with this one word question. I think he?s on to something.

John at Rich and Fulfilling Life asks a serious question ?where do you get your financial advice?? in Money and Sex. People often get their advice from common sources like friends, the internet and the media without any critical analysis of their validity. So where should we get financial advice? Check out the post and see.

Jacob at Early Retirement Extreme had a thought provoking post this week, On the universally declining standards of living. While we focus heavily on micro strategies to squeeze more out of each dollar on personal finance blogs, my own thought is that it?s close to meaningless to do so unless we have some understanding of the big picture factors affecting our finances. Probably the biggest of these is the flat (or declining by some measures) standard of living that been happening since at least the early 1970s. Unless we know what it is we?re truly facing, there?s no way to adequately prepare ourselves.

Speaking of big picture, I?d recommend virtually anything written by my friend Matt and his partner George over at The Online Investing AI Blog. If you like your reality even if it hurts?and I do?there?s a wealth of wisdom on this site. Good posts this past week included Why now may not be such a Great Time to Buy a House and Six Tips for Running the Millionaire Marathon, and while I recommend these, the site is rich in hard hitting information and opinion posts throughout.

That?s it until my next round up?which could be a few weeks in coming?

8 Responses to Starbucks, Blockbuster and Friday Round Up June 25