An article this week from USA Today (Speeding ‘cushion’ may dwindle due to recession) reports that the 5-10-mph speeding “cushion” we?ve been enjoying most of our lives may be disappearing as cities and states work to close budget gaps. 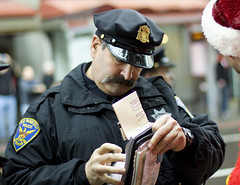 The article confirms what many of us have suspected for some time: ??it’s clear that many communities are turning to traffic citations for added revenue in tough financial times.?

This news highlights an expense most of us rarely think about: non-compliance expense. What ever we think of it, it?s very real and never more than now.

Is this actually an expense?

OK, this isn?t a category most people think of as an expense in the conventional sense, but we live in a society which is heavily regulated and there are more laws regarding ordinary behavior than most of us can imagine. It?s important to realize that there are fines attached to our non-compliance with those laws and regulations, so we need to keep that fact in mind even in those moments when we may be feeling a bit, shall we say, rebellious.

Technology is increasingly rendering non-compliance a fools bet. It doesn?t matter if you agree with a law or not, non-compliance can cost you money, or worse, so it?s best to relent, obey the rules, and just get used to it. If you feel passionate about a certain law, take it up with your political representatives, but never respond by ignoring it.

When driving your car, be aware of speed limits and slow down a little?especially now! Remember to use your signals at intersections and when making lane changes. Stop pushing and tailgating and be on the look out for other vehicles and especially for pedestrians and bike riders?never forget that you CAN kill someone while driving.

Obey stop signs by actually coming to a complete stop, and always assume that there is a traffic camera at any red light you approach?increasingly, that assumption is proving correct.

Not only will you decrease your chances of getting into an accident, but your best defense against an unseen police car parked on the side of the road is to be doing the right thing when you drive by. If you make safe driving a habit, you won?t have to worry so much about the police in the first place. Violations will result in unneeded fines and points on your license which may produce insurance surcharges.

Bad habits can cost too

Avoid talking on your cell phone while driving, even if it is legal in your jurisdiction. It?s a real distraction that can land you and others in a difficult situation. Save it for emergency use only, and when needed, use it on hands free mute mode.

A couple of years ago I was rear ended by a car that had been hit by a lady talking on her cell phone. What was completely ridiculous was that it happened at a RED traffic light. Several cars were stopped at the light, including me, and the lady missed not only the red light, but also the cars parked in front of it. Some information after the fact indicated that it wasn?t her first accident involving use of her cell phone. Sometimes we get so used to something that we fail to realize what can go wrong. Cell phone are just such a item.

Do not ignore the DUI laws in your state or think you?ll never be caught. Maybe you won?t, but if you are the consequences of fines, surcharges and loss of license can be steep.

Be sure to pay at any metered parking spaces you use, and for any toll booths you enter. Getting a $50 fine for ignoring a 50 cent toll makes no financial sense what ever.

Keeping clean and being a good neighbor

Be aware of the laws and regulations surrounding your business and do your best to comply. Always pay your income taxes, otherwise fines and penalties accumulate. If you can?t pay the tax, file the return anyway (with a partial payment at least) and request a payment arrangement or settlement, but never fail to file because you don?t have the money. Failure to file or failure to disclose income penalties are much higher and can result in criminal penalties as well.

The same goes for how you live. No matter how strong the urge, you don?t need to be playing your electric guitar at three o?clock in the morning, or running around your neighborhood (or anywhere else) in a drunken stupor.

In conflicts, give people the benefit of the doubt and be prepared to give way unless an unsafe condition might be caused by your backing down. Be polite and reasonable with people you meet or transact business with, and always keep your carnal desires in check. No matter how right or innocent you may think you are, the other party, as well as witnesses, a police officer or a court of law, might think otherwise.

The cost of non-compliance

Every year there are millions of lawsuits filed over issues we can?t even imagine, and according to the World Almanac, over 10 million arrests were made by police in 2006. With numbers that high, never assume it can?t happen to you because you?re too smart or too good a person.

The cost of living is high enough without incurring preventable expenses. As regulated and litigious a society as we have become, do your best to stay on top of legal developments (without obsessing on them) and be sure to be at least in general compliance. Always operate in good faith and show at a minimum a general intent to comply.

Since the legal, tax and regulatory nets are so tight, it may not be possible to avoid non-compliance entirely, but we should do our best to keep them to a minimum.

What do you think?is ?compliance expense? a legitimate expense in our world? What are you doing to keep it to a minimum?

( Photo courtesy of greenkozi )
Tweet
Share
Share
0 Shares
← Payoff Your Credit Cards – But Set the Stage FIRST
How Do You Stop Others From Using Your Wireless Internet? →