The Bureau of Labor Statistics, the government in general, economists and industry leaders have been proudly proclaiming the ?low? 4.something percent unemployment rate. To hear the official dogma, unemployment is a non-problem. And they may be right. Because the real job market problem is underemployment not unemployment.

This helps to explain why wages are remaining stubbornly flat since the Great Recession ended, why jobs seem so hard to get, and why something just doesn?t feel right.

Even though most of the population seems to be employed ? at least those who want to be ? we still seem to be struggling with some sort of undeclared malaise. And that?s eight years into an economic recovery. It makes you wonder what will happen when the next downturn hits.

The Evidence of Underemployment

The Bureau of Labor Statistics (BLS) reported that the underemployment rate was 9.2% at the end of the second quarter of 2017. The BLS describes this as:

If that?s accurate, it?s double the official unemployment rate. But even that almost certainly understates the problem. Consider the following?

It?s often been reported that one of the major reasons why the unemployment rate is falling is because people are dropping out of the labor force. No one is exactly sure why this is. Theories include people taking early retirement, young people staying in school longer, and more people on disability insurance.

We can blame the apparent laziness of twenty-something males. We could even blame the increasing attractiveness of the video games themselves. But is it also possible that the games serve as an escape hatch for young men who feel increasingly excluded from the workforce?

Whatever the reasons offered for the decline in the labor participation rate, it is a real thing.

After hovering around 67% through much of the 1990s, and peaking at 67.3% in 2000, the labor participation rate in the US has been on an almost steady decline. It?s currently down to 62.7%. That means that even though there are more people working than there were in 2000 ? because the population has grown considerably in 17 years ? the actual rate of employment has declined by 4.6 percentage points. 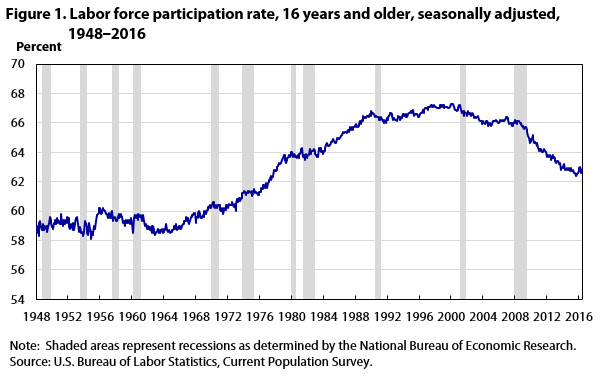 (Source: US Bureau of Labor Statistics)

What Underemployment Looks Like and Where it Comes From

Let?s take a stab at defining the various factors that are contributing to underemployment. 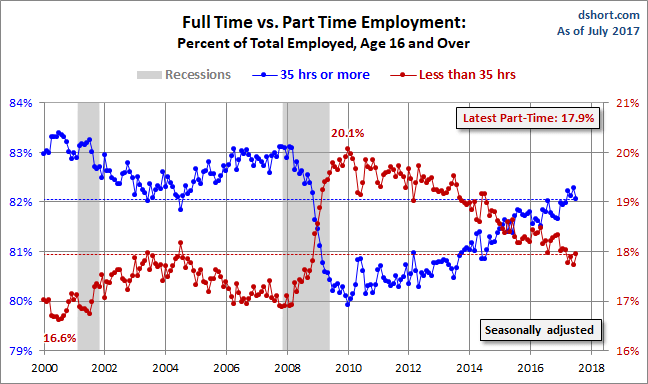 Part-time work is defined as working less than 35 hours per week. More than one out of six workers in the US works only part-time. And that?s eight years into a statistical expansion in the economy. We can only imagine how high that percentage will go in the next recession.

Social Security Beneficiary Statistics reports the number of people collecting disability benefits stands at over 10.6 million. This compares with just over 4.4 million 30 years earlier in 1987, and over 6.6 million in 2000. That represents a 240% increase since 1987, and 60% just since 2000.

(For what it?s worth, I?ve seen multiple statistics from the Social Security Administration itself that reports the current number of disability beneficiaries as somewhere between 8.8 million on the low side, and 14.2 million on the high side. Could it be that even the hallowed SSA doesn?t really know for sure?)

It?s widely speculated that unemployability, rather than strictly disability, is the reason why the number of people collecting benefits has risen so rapidly. Is it possible that the government is lowering the bar to accommodate economic ?disability? as a means to reduce the workforce, and thereby unemployment? If so, is this a backdoor response to an employment obsolescence trend that?s never declared?

Free thinkers should dare to consider as much.

The Rise of Contract Workers

A 2016 research report out of Princeton and Harvard Universities found that the number of contract workers in the US has been rising rapidly in recent years. The Rise and Nature of Alternative Work Arrangements in the United States, 1995-2015 found that contract work arrangements have increase from 10.1% of the workforce in 2005, to 15.8% in 2015. That?s a gain of more than 50% in a decade.

There are all kinds of reasons for the dramatic increase in the number of contract workers. And all of them benefit the employer, not the employee. For starters, contract arrangements end any notion of employment security. The arrangement is completely at-will. The employer can terminate the employee at any time, and without severance compensation.

It also enables the employer to forgo benefits, which means that the employee has to get his or her own benefits. Worse, many employers withhold no taxes, leaving it to the employee to cover them. (Fact: most contract arrangements are totally noncompliant based on IRS regulations.)

What it all means is that contract workers are only marginally employed. A contract worker may be earning $1,000 per week, which sounds impressive on the surface, but has no benefits, must pay his own income and FICA taxes, and can be released at any time without notice.

Having been a contract worker myself, it?s a game I fully understand.

The REAL Job Market Problem is Underemployment ? Not Unemployment

Let?s get back to that BLS underemployment number of 9.2%.

If 15.8% of the workforce are contract workers, 17.9% work part-time, and 4.5% are outright unemployed, that produces an underemployment rate in excess of 34%. It also means that the BLS?s 9.2% rate of ?marginally attached workers? dramatically understates the magnitude of the problem. In fact, let?s call it what it really is ? a complete farce.

A figure of 34% goes much farther in explaining the real job market problems. That is, why wages are flat, and why jobs are still so hard to get after an eight-year expansion.

Why go through this exercise? Because reality is always more important to us as individuals than the happy spin that the officialdom wants us to believe. We live in the real world, not a make-believe world of padded statistics.

How to Deal With the Underemployment Problem that?s Mostly Ignored

If underemployment is running at 34% ? or anything close to it ? that affects everyone. Unless you are in the top 10% of workers who are well employed, the high rate of underemployment is affecting you. We could even break it down by saying that 34% of the population is underemployed, which is having a negative effect on 56% of the workforce, while 10% are so well insulated that they don?t even believe that it?s happening.

If you?re in that top 10%, then none of this applies to you. At least not right now. But for the 90% who are affected by it, or for any of the top 10% who see the potential, I have some suggestions.

Let?s start with this admission: labor is being systematically devalued in the 21st Century. If you don?t believe that then you?re doomed to be run over by the trend.

Technology is providing the means, and the need to remain profitable in a saturated business environment is providing the motivation. Employers must cut costs in order to survive, and payroll is their biggest cost. That means that the trend isn?t likely to improve, and will certainly get worse when the economy turns down.

Enough whining. Let?s talk about what we can do about it.

Strategies to Deal With the Underemployment Problem that Isn?t Being Acknowledged

The best strategies are the ones that aim to find specific niches in the job market, or to exit the market entirely, and cut your own path.

Self-employment. A person who can sell his or her services to the general public doesn?t need a job. That means that self-employment is the ultimate career solution. You don?t have to get fancy, or invest a lot of money either. You can do something that?s within your skill set, such as what I did with freelance blog writing. Identify your own skills and talents, and find a way to sell them on the open market.

Work for small employers. When you work for a large organization, you?re a number on a chart. And chart line items are destined to be reduced. But when you work for smaller businesses, you?re there to do a hands-on job that needs a personal touch. You usually won?t make as much money as you will with larger companies, but it?s a way to remain employed, while developing very relevant (and highly transferable) skills.

Working in part-time jobs with health insurance. Sometimes the best way to earn a living is doing it from several sources. We?ll get into that next. But a part-time job can form the basis of that income arrangement. It?s even possible to get certain benefits, such as health insurance through a part-time job. Investigate the possibilities; you may be surprised at what you find.

Doing gig work. This is almost a form of micro-contract work, but it has more of a self-employed flavor to it. Gig work can encompass everything from a part-time job, to supplying specific skills to businesses and individuals, to creating your own side business. Become adept at gig work, and you may never need a traditional job again.

Creating multiple income sources. This is about creating income streams from various channels. It can include a part-time job, gig work, or running your own business. There?s even a title for it now ? mobile creatives. As a mobile creative myself, I can tell you that?s an excellent way to make a living, once you get rolling with it.

I recognize that many of these strategies will take you out of your comfort zone. But so will a bout of unemployment, and the need to find a new job, or create an entirely new career. Unemployment may be ?under control? at the moment, but that?s only because the bigger picture problem is being ignored. Underemployment looks like it?s here to stay. The only rational course is to attack it head on, with every intention of coming out ahead.

Do you feel the heat of underemployment in your job or career? Where do you think this will go in the future?

11 Responses to The REAL Job Market Problem is Underemployment ? Not Unemployment