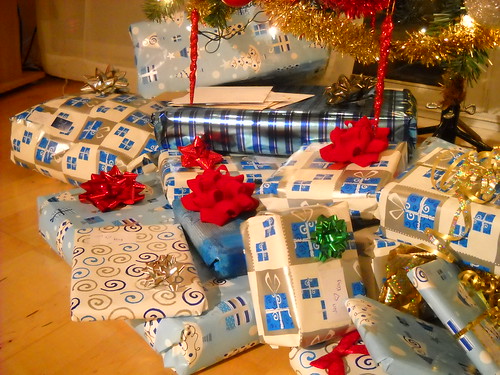 I have a theory?I call it my ?December theory??and it goes something like this: every year, beginning about a week before Thanksgiving, and carrying through the entire month of December, the population triples. How else can we explain why the stores are so crowded, why we have to fight for parking spaces in places we usually don?t, why the lines at restaurants are so long and why the highways and airports are so crowded? Where are all these people the rest of the year?

The only logical explanation is that two-thirds of the world lives in some sort of seclusion all year, and only comes out as December approaches.

Every year it seems, Christmas gets more hectic. There?s more going on, more people to buy gifts for, more places to be, more things to do. We rush from place to place to compete with others for suddenly scarce resources and somewhere in that mess attitudes get a little lousy. Admit it–January feels SO good, doesn?t it?

The gifts, the toys, the kids, the family, the food, the music, the decorations, the travel?the TV specials! Is that what Christmas is about? It?s all those things, but there?s something more.

So what IS the real meaning of Christmas? I?ll take a stab. You might recognize this one from the cartoon Christmas classic, Charlie Brown?s Christmas, which was created in 1965 when people weren?t offended by such utterances in public places?

And there were shepherds living out in the fields nearby, keeping watch over their flocks at night. An angel of the Lord appeared to them, and the glory of the Lord shone around them, and they were terrified. But the angel said to them,

?Do not be afraid. I bring you good news that will cause great joy for all the people. Today in the town of David a Savior has been born to you; he is the Messiah, the Lord. This will be a sign to you: You will find a baby wrapped in cloths and lying in a manger.?

Suddenly a great company of the heavenly host appeared with the angel, praising God and saying,

?Glory to God in the highest heaven, and on earth peace to those on whom his favor rests.?
— Luke 2:8-14

An old story? A nice story perhaps? In a world where technology and science are considered to be the ultimate stamps of credibility, cynicism and a willingness to question long held beliefs can often pass as a badge of intelligence. And we all want to be intelligent! I know?I grew up in the same world. But life has taught me one thing: truth can?t be changed by a lack of belief by any of us, or even by all of us.

There?s something more about Christmas, more than the other holidays. What has been faithfully celebrated for nearly 2000 years is too strong?even too obvious?to be ignored or minimized. Maybe it isn?t the presents, the decorations, the music and the merriment; maybe as The Grinch discovered after his famous attempt to squash it, ??Maybe Christmas? he thought, ?doesn?t come from a store?Maybe Christmas… perhaps… means a little bit more!”

That?s a point to ponder this Christmas. And the implications are enormous.

What is it that you celebrate on this highest of holidays?