Planning a retirement isn?t just about you. The first goal is to provide for your own financial needs. But most of us have a secondary goal of being able to leave something behind for loved ones or charities. The Retirement Risk Evaluator helps you know to what extent taking care of one of those goals makes it harder to take care of the other.

Say that you plan to retire at age 65 and want to be sure that your portfolio will last until you turn 95. Valuations are at fair-value levels at the time you are beginning the retirement and you have put aside $1 million. Your first question is — How much can I afford to take out each year to cover living expenses and be virtually certain that my plan will not go bust? That?s the safe withdrawal rate (SWR). 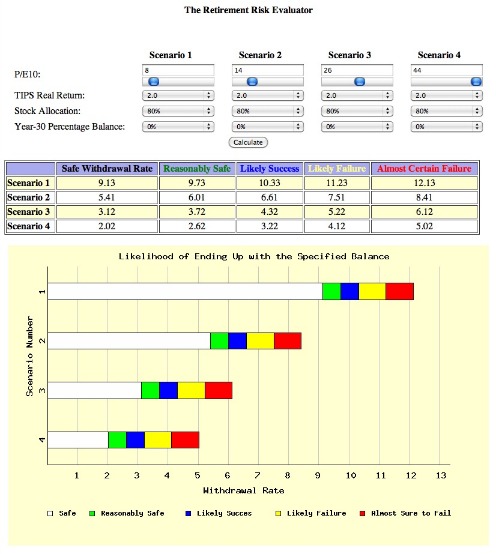 The Risk Evaluator tells you that the magic number is: $54,000 (an SWR of 5.4 percent). That?s a worst-case-scenario number. If you are willing to take on a little bit of risk, you could withdrawal $60,000 in inflation-adjusted dollars each year. The calculator shows the 6.0 withdrawal rate to be ?Reasonably Safe.? That means that there?s an 80 percent chance that it will work out (another way of saying it is that that withdrawal rate works with 80 percent of the returns sequences we have seen in the 140 years of stock-market history available to us for study).

That?s useful information. But it?s important to understand that the convention with SWR studies is to assume that in a worst-case scenario the portfolio will be 100 depleted at the end of 30 years. Yes, the $54,000 annual withdrawal will work even in a worst-case scenario. But it will not leave you with even a penny to leave to heirs. If you take out that amount each year and you happen to turn up the blackest return sequence card we have yet seen in U.S. stock market history, you will end up spending your last dollar somewhere near your 95th birthday.

What if it is important to you to be able to leave half of the initial portfolio amount ($500,000 in inflation-adjusted dollars) to your heirs? How much do you need to lower your annual withdrawal to pull that off? The calculator reveals the answer. 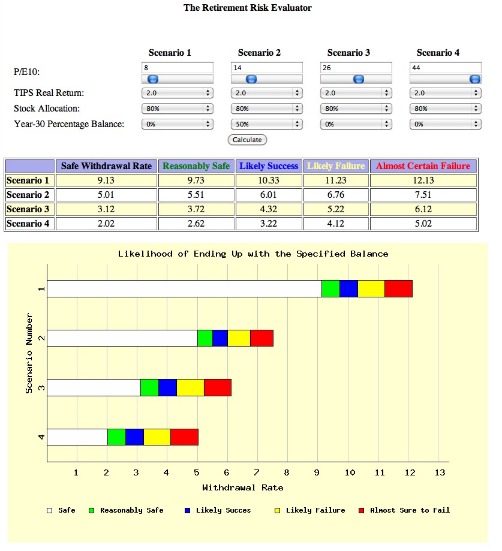 That might surprise you. Lowering your spending by only $4,000 permits you to be sure that even in a worst-case scenario you will be able to leave $500,000 to heirs rather than $0. I see that as being a very nice trade-off. The thing I love about this calculator is the way it lets you play with the various assumptions to highlight trade-offs like that.

Let?s take it a step farther. You only need to reduce spending my $4,000 to guaranty the ability to pass along $500,000 to your heirs at death. You could probably pull that off with not too much belt-tightening. What if you wanted to be able to retain the full $1 million in your portfolio until death? How much would you need to reduce your annual spending figure to achieve that goal? 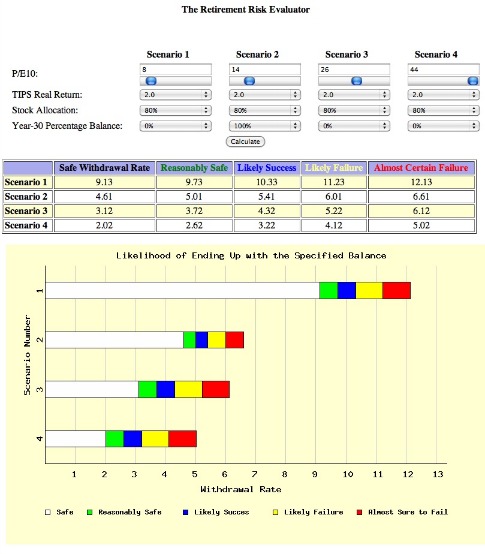 That would be a little tougher to pull off. But certainly not impossible. The point here is that you want to make an informed choice. If you feel that you need to be able to spend $54,000 per year in retirement, you cannot be sure that you will be able to leave anything to heirs. Spend only $46,000 and you are virtually certain of being able to pass along the entire $1,000,000. The middle road is to spend $50,000 per year and to be virtually certain to be able to pass along $500,000. Armed with that information, you are far better able to do what is best both for you and your heirs than you would be if you had not investigated the numbers.

Your stock allocation affects the result too

You can also change the assumption for the return you will be able to obtain from that portion of your portfolio not invested in stocks. For purposes of the calculations reported above, I assumed a non-stock return of 2 percent real. There are times when you can do a lot better than that — IBonds paying a 4 percent real return were available at the top of the bubble. Lock in those rates and you can up your annual withdrawal.

There are lots of possibilities. I believe that this sort of analysis is the future of retirement planning.