Home › Health Insurance › US Ranked #54 in Health Care Efficiency ? Should We Be Surprised?

Bloomberg came out with a report last week showing how poorly America stands on the health care front. In These Are the Economies With the Most (and Least) Efficient Health Care the US ranked #54 in health care efficiency.

I think they?re on to something.

That?s a very different way of measuring health care, and one we can all get behind. The US has an excellent healthcare system in some ways. But affordability and widely diverse levels of care make the point of inefficiency obvious.

Now I must confess, I?m not exactly partial to these kinds of international surveys because I think they intentionally try to make the US look bad. But this one is prepared by Bloomberg itself, and not by some agency of the UN or some other international board bent on painting us ugly. It?s one we need to take seriously.

American health care undoubtedly turns out many of the greatest advances in medical science the world has ever known. The critically ill from all over the world come to this country for the most advanced treatment. If medical innovation were the sole deciding factor, the US would be the world?s health care heavyweight champ.

But health care efficiency measures something much more fundamental, and that’s bang for the buck. I think most of us realize that’s where American healthcare falls apart.

The Bloomberg analysis measured the health efficiency index of countries with lifespans of at least 70 years, per capita GDP of at least $5,000, and a minimum population of 5 million people. The analysis develops an efficiency score based on a combination of life expectancy, and both relative cost percentage and absolute cost in dollars for health care in each country.

The study is based on information reported in 2015, which isn’t entirely up to date, but it’s close enough. And it measures the US health care system in the second full year of Obamacare.

What I like about this analysis is that it squarely measures what we?re getting for what we?re paying. And the results aren?t good.

One of the complaints I?ve leveled against the US health care system in the past is that we have the patented American view that we can solve the nation?s ills by throwing more money at the problem. This isn?t working with health care. What we have instead is a chronically expensive system that?s long on promises and short on performance.

The Biggest Surprises in the Bloomberg Analysis

The biggest take away of the analysis is that the US ranked #54 in healthcare efficiency, despite spending considerably more money on a per capita basis. This is the bang-for-the buck issue. We?re simply not getting the return on our health care dollars that we assume.

More important, US per capita health care spending is roughly twice that of other rich countries.

But despite all that extra spending, the average lifespan in the U.S. is just 78.7, ranking us just #26 in the world in life expectancy. That puts us behind Canada, Japan, South Korea, Australia, Taiwan, Israel, New Zealand, and most countries in Europe. It also puts us behind Lebanon (79.4), Costa Rica (79.6), and Chile (79.3).

Mistaken Assumption: We Can Have the Best Health Care in the World if We Spend the Most Money

Below is a screen shot of the 10 countries judged to have the most efficient health care systems from the Bloomberg analysis: 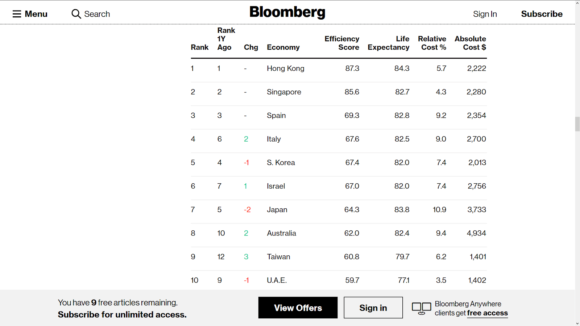 Keeping in mind the U.S. spends around $10,000 per capita for health care, notice that the top six countries ? Hong Kong, Singapore, Spain, Italy, South Korea, and Israel ? all spend less than $3,000 per person. That?s less than one-third what we spend for a health care system that ultimately provides us with shorter lifespans. Australia spends roughly half what we do, but provides longer lifespans.

This points to another issue I?ve been highly critical of in the past. Virtually all discussions on fixing US health care center on funding, and not cost reduction.

Given that we already pay more for health care than just about anyone else, funding is clearly not the answer. The fact that other countries can provide similar or better levels of care at half or less than the cost we?re paying makes it clear that funding is not the issue.

We?re already spending too much on health care, and that?s the core problem. Efficiency is important in all human endeavors. No matter what it is we want to do ? or how noble it seems ? we always have to measure the cost.

That?s what?s missing from all public debates on health care in the US. Obsessed with finding more funding, the cost spiral goes unquestioned.

The answer is clearly NO. But few in America seem to comprehend that how much we spend is increasingly irrelevant.

Why Health Care Efficiency Matters More than Technology and Brilliance

The basic problem is when technology and costs are high, the distribution of health care is constrained. To deal with rising costs, health insurance companies are not only raising premiums, but also increasing copayments, deductibles, and coinsurance provisions.

While that kind of deductible makes the basic insurance premium more affordable, it essentially leaves the consumer with no coverage for most treatments. A person even might forgo treatment because he has to pay an out-of-pocket deductible of $3,000 for a single treatment. And in a country where 61% of the population can?t come up with $1,000 for an emergency expense, that?s no small problem.

And remember, the individual or family is already paying thousands of dollars each year for health insurance premiums. (Which not coincidentally, is a major reason why they can?t come up with $1,000.)

Ultimately, it doesn?t matter if you have what is technologically the best medical treatment in the world. If many or most citizens can?t afford it, it?s not efficient, and it isn?t working.

One sign of the stress is Medicaid. There are currently almost 74 million people enrolled in the program. That?s nearly one-third more than the 56.5 million who were enrolled just five years earlier. That currently takes in nearly a quarter of America?s population.

With both the overall cost of healthcare and Medicaid enrollment rising, we have definitive proof the entire system is beyond inefficient. We must even consider the possibility that the entire US health care system could somehow blow up.

It may not be a spontaneous implosion, but more likely a significant weakening of the general economy, that renders the entire health care system unaffordable.

What Can We Do About This on an Individual Level?

I?d love to say there?s some secret solution floating around out there waiting to be discovered. I somehow doubt it. I?m of the opinion that all we can do is muddle through until some sort of blessed metamorphosis takes place.

The entire U.S. health care system has become so bloated and convoluted that it?s unlikely anything can be done until it collapses into the dust. At that point, we?ll have an opportunity to rebuild with entirely new options. Ones that will be more closely correlated to basic need.

I?ve laid out some thoughts on this topic in What Will Replace Health Insurance After Obamacare Blows Up, but here?s the summary:

And while it?s touched on in the article, I personally believe universal health care won?t work in the US for a number of compelling reasons.

In the meantime, the evidence is mounting that our health care system is close to its terminal stages. We can continue pretending that we can go along as we always have. But with the U.S. ranking #54 in health care efficiency, it?s clear the day of reckoning is fast approaching.

In a country that prides itself on being #1 in everything, being #54 in a category as important as health care should have us all shaking in our boots, and seriously investigating potential alternatives.

How do you think this will all play out?

( Photo by Fortius Clinic )
Tweet
Share4
Share
4 Shares
← Why You May be Better Off Renting Your Home
Why You Have to Think of Yourself as Self-Employed Even if You?re Not →

10 Responses to US Ranked #54 in Health Care Efficiency ? Should We Be Surprised?