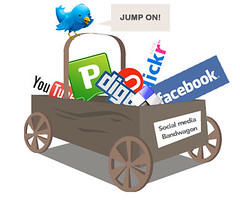 Twitter, Facebook, blogs, Digg, Stumbleupon. When we think of the social media, we often think of it as mostly a toy to be used to connect with others and to entertain ourselves, or as a place to peddle income producing wares. But what about using it to drive ideas that are important to us, even if they won?t win us any friends or earn us any money?

For the same reasons the social media is effective in enabling people to connect with others or sell products and services, it?s also an outstanding venue in which to promote ideas. What kind of ideas? How about politics, faith, health, environmental concerns, legal issues, public debates?you name it. If you can tweet, text or blog about your social and private lives, you can do the same about issues with wide public appeal.

The mainstream media have conditioned us to assume that all the great ideas will come from the appropriate ?they? or ?somebody??as in ?they? should do this, and ?someone? should do something about that. The social media has opened up the field, and now WE can participate in the formation and promotion of ideas.

What happened to talking over the fence?

There was a time when people actually knew their neighbors! They spent time ?talking over the fence?, an expression that meant sharing the details of your life and community with the people who lived closest to you. Neighbors weren?t simply people who lived in adjacent properties, but people you knew and who knew you and you relied on each other. If you had an idea you wanted to put out there, your neighbors were a natural place to start.

But how do we do that in an increasingly disconnected world? The social media is providing that outlet. We may not be connected directly with our neighbors, but our own little worlds are getting bigger as we connect with people in different communities and even in different countries. An idea put out to a few friends or acquaintances on the social media has the potential to go viral and circle the globe.

There are basically two ways any of us can get noticed by the mainstream media: pay the steep price for ad space or do something so humiliatingly embarrassing (or shocking) that they come to us. Most of us won?t do either.

The traditional or mainstream media seems to be concerned with two things (apart from ad revenue!): getting our attention, and performing some sort of gate keeper function making sure we get some types of information but not others. TV news programs are degenerating into sensationalist tabloid formats while the print media is failing at what ever it attempts. It isn?t just in decline, but a steep decline at that.

Some of it is easy, cost free entry. Some of course is related to changes in technology, but I also tend to believe that much of it is because the traditional media has less regard for what the public actually wants. While they focus their formats on an increasingly narrow section of the population, the majority is simply moving on to other sources that are more relevant.

The social media is unedited and largely un-filtered, a place where we can hear and be heard. For the most part, there are no gatekeepers or editorial staff to exclude a story or event or to spin an information flow a certain way. It?s pure information. Perhaps even more important, the social media is the center of open public debate. This is where new ideas largely originate and it?s driven entirely by participation. On the social media we?re not listening politely while we?re lectured, we?re actually putting our thoughts into the media stream for consideration by others.

That?s true grass news media, a media flowing from the ground up. It doesn?t matter if you think of this development as good, bad or somewhere in between, it?s a tidal wave overtaking the world. Each of us has a chance to be a part of it simply by participating. Rest assured that if you?re interested in something, so are many others!

The new face of politics?

Often, we vote then complain about the way things are, stopping short of saying that our vote really didn?t matter, but the implication is clear. And it should be?voting alone really isn?t enough. Voting is an up or down process, not an opportunity to express our thoughts, concerns or even displeasure.

When we go to the voting booth every two or four years we typically have only two choices?TWO out of a country of over 300 million people! Truth be told, a lot of good people and brilliant ideas are buried in that process.

The days of politicians traveling to small towns and holding open debates with the public in the local townsquare are over. Today we have press conferences and staged debates in which a limited number of candidates are asked pre-selected questions by a small panel of noteworthy ?experts??usually journalists and academicians. In truth, that makes today less democratic than times past.

The social media may not enable us to address politicians directly (though sometimes it can) but it is the new place for the exchange of free ideas and a place where the average citizen can come forward with small ideas that may have a chance of becoming big ones in a way that isn?t possible in a voting booth. A brilliant idea or concept put out on the social media or in a blog post or blog comment has the potential to crawl it?s way into national policy. A well written comment can result in an invitation to write an article on a large website read by thousands or even millions of people. Compare that to an up or down vote!

If you have a foothold in the social media, be it Twitter, Facebook or any of the other media?and more so if you also have a website or blog?you have an opportunity to introduce and drive your ideas in a way that would never be possible through TV or the print media?are you taking advantage of it?

Are there ideas you?ve been able to promote on the social media that you?re certain wouldn?t be welcome in more traditional venues?

2 Responses to Using the Social Media to Drive Ideas