Home › Ways to Save Money › Wasting (Money) Away Again in Margaritaville

The Local Watering Hole as a Financial Bottomless Pit

At the risk of personal safety I?m going to take aim today at an ?expense? that may be sacrosanct for some, but that?s exactly why it needs to be discussed.

Jimmy Buffet?s 1977 sentimental favorite Margaritaville tells a tale of a carefree life lived on a warm beach in a perpetual state of inebriation. As appealing as that can be at times, when it?s romanticized into a regular activity at a local bar, the costs can be steep, and we aren?t just talking about money. 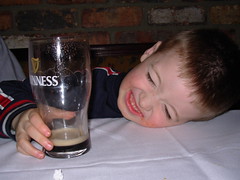 For the purpose of full disclosure, I?m a light drinker. I?ll indulge in an occasional beer or glass of wine (or two or three), most frequently with dinner guests, but consumption of alcohol has never been a priority in my life. I can go for months without drinking or sit in a bar for three or four hours nursing soft drinks, surrounded by people drinking the hard stuff. I don?t know if that status disqualifies me or gives me the vantage point of an objective outsider, or if it even matters.

Bars?separating us from our money while we?re doing other things

The venerable ?watering hole? has for thousands of years been a common meeting place for folks of all types, and in a society which is rapidly becoming starved for community and human interaction, that?s not a bad thing at all. But at least from a financial standpoint, there are few places worse than a bar!

If you?re going to a bar to literally have a drink?that?s singular, as in one drink–with one or more friends, that isn?t a problem; where else can you go to a public venue and have a good time with other people for about five dollars? The problems come in when you get beyond one drink, a very easy thing to do when you?re in a group. Consider the following:

Bars are in the business of selling drinks. If no one in your party orders any after the first round, the bartender and management may not welcome your continued patronage. Purely from a financial standpoint, this could be the most favorable outcome.

Impaired judgment raises the tab. After two drinks, judgment becomes impaired and resistance to ordering more drinks or incurring other expenses weakens as the time in the bar increases. Two drinks can easily lead to three, and then to four and so on. At some point food may be added to your order and by then the finances are out of control. Then some of the boys (or girls) may also want some coffee to counteract the affects of the liquor; you get the picture. Four or five people sitting in a bar for a few hours can easily run a tab of several hundred dollars.

Paying for The Group. In a group setting with people drinking, one of the first things to go is anything which resembles an accounting function. After a few drinks, no one is keeping a record of who ordered what, and you can easily get stuck paying for part of your buddy?s eight drinks in addition to the two that you ordered for yourself.

You?re in a friendly group setting, so you?ll quietly pay your ?fair share??and part of everyone else?s–and smile while you?re doing it, because that?s the unofficial but universally recognized bar protocol. The point is that in a bar setting with other people, though you may carefully regulate your own consumption, you will have little control over how much money you will dole out by the end of the night. The last thing you need to do when you?re on a budget is to get yourself into a position of bankrolling the excesses of others!

The effects of going too far. Inebriation is always a distinct possibility in a group setting, which can lead you to do things you?ll later regret. We become bolder when we consume alcohol, so the likelihood of making unwanted advances or of picking a fight with someone who bumps into us or says the wrong thing are heightened considerably. In addition to the humiliation or injury you risk, there are also the longer term consequences of facing legal action or even criminal charges.

A few hours of letting loose can cost you for years or for a lifetime. If you?re already in a financially weakened position, and maybe drinking to release stress, you?re even more vulnerable to a bad outcome. This is because you will have fewer monetary resources available to clean up the mess you made on a drinking binge. There?s a good reason why poor people are more likely than rich people to go to jail and its spelled m-o-n-e-y, or more precisely, the lack of it. An attorney friend of mine used to say ?never create a $1,000 problem that?ll cost you $100,000 to fix.? Good advice?

Tell it to the judge. Finally, there?s the obvious threat of a DUI charge. Ever since DUI laws were put on the books, the blood alcohol level at which the charge applies has been getting progressively lower. In some jurisdictions, two drinks consumed are enough to put an adult man in trouble with the law, and as little as one drink for an adult woman (since women are typically lighter in weight). This isn?t something to be taken lightly.

We?ve now moved from dropping $50 or $100 at a bar, to potentially thousands in court. And in addition to fines and insurance surcharges, you could lose your license or even face jail time. In either case, your ability to earn a living would be impaired?can we even put a price on that?

Starbucks to the rescue

If getting together with friends or coworkers for camaraderie and conversation is the true objective, getting together at coffee shop will be far easier on the finances. Consider the advantages:

Also, if you or your friends need the booze in order to enjoy one another?s company, you may not be as fond of each other as you think.

5 Responses to Wasting (Money) Away Again in Margaritaville