Home › Careers › What Happened to the 40 Hour Work Week? 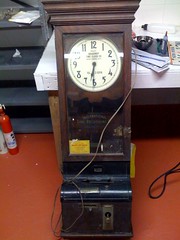 Does anyone work a 40 hour work week anymore? You know, the comfortable, predictable ?9 to 5? that we often complained about during more certain times? Apparently fewer employees than ever still have this luxury, and if current trends continue, fewer still will have it in the future.

An article by Seth Fiegerman on Yahoo Finance earlier this month, The End of the 40-Hour Work Week confirms these changes in work schedules and the forces behind them:

“Higher-level workers are increasingly being asked to put in 50 hours or more a week?while lower income workers are often forced to work fewer hours but at jobs with irregular schedules, according to a comprehensive report from the Center for American Progress?Driving these changes?are companies turning lower-level full-time jobs into part-time employment to cut costs, savings that come at the expense of workers — and their families — losing the traditional schedules and financial benefits that come with full-time employment.”

The typical work schedule has become more erratic and the neat, predictable 40 hour work week is fast fading into the dustbin of history.

As the Yahoo article outlined, there are two very distinct groups impacted by irregular work schedules, but in completely opposite directions.

40 hour PLUS workers. There was a time not long ago when this group was mainly comprised of executives and managers. They were expected to work longer hours as a result of greater pay and responsibilities. That?s still true, but today it seems that nearly anyone can fall into this category. If you want to keep your job in this economy, you need to do the work of two people and something will have to give?usually your schedule. Some people are paid for the extra time, others not.

The problem with this arrangement is that there?s little room for anything but work and that leaves festering voids. The employee spends so much time working that there?s no time to develop new skills, maintain business and networking contacts or search for a job, should that become necessary. In the event the job is lost, the worker will need to make a radical shift from an employee completely consumed with his job to an unemployed person suddenly needing to launch a job search from the ground up.

Making it worse is that an overburdened work schedule can lull the employee into thinking he?s irreplaceable?after all, since his employer needs him to work so many hours, he must be too important to fire. Not so–no matter how important you may be at any given moment you could still loose your job for no reason that?s apparent to you! That?s the paradox of the 21st Century job market.

While the 40 hour plus crowd may be laboring under the delusion of being irreplaceable, the less than full time employee faces a dilemma that?s radically opposite: he isn?t certain of anything. Not of keeping his job, having a chance at a promotion, or even how many hours he?ll work or how much money he?ll earn in any given week. That means planning for the future is a non-starter. A type of limbo is created in which the worker is locked into a less than perfect employment situation with little prospect that his circumstances will improve anytime soon.

How should we respond to this

Erratic work schedules?and all that they imply?are fast becoming the new normal. Wishing them away is pointless; finding ways to deal with them is the critical take away. Like globalization, technology and the off-shoring of jobs to areas with lower labor costs, our only constructive course of action is to adjust and find ways to move forward.

Recognize that the career you?re in may be a dead end. If working 50 or 60 hours a week, or being downgraded to less than full time status have become common in your field, it may be a sign that the industry is in a long term decline. That?s the time to begin taking steps to move into another field or industry. If you have to get out, it?s best to do it early in the cycle, rather than waiting until the exits get crowded and competition for alternative careers becomes even greater.

Work toward self-employment. Perpetually extended work schedules and reduction to part time status are signs of instability. We all need a certain amount of stability in order to make plans and get on with our lives. If the system no longer provides that stability we have to look to ourselves to find it, and that means some form of self-employment.

Get some kind of business started in an area where you have either the skills or the passion?preferably both?then prepare to dig in and advance it for as long as it takes. I?m doing that right now with freelance blog writing. I?m working it as a side venture while building it into something more substantial over time. Love it or hate it, the world wide web has become a treasure trove of opportunity?find your niche somewhere within it and then run with it.

Find ways to make the trend your friend. We all want to get back to something that looks like normal as quickly as possible, but we?re probably in a time where that won?t be practical or even desirable. For example, now might be an excellent time to move into a less than full time job that will give you the time you need to either develop new career skills or to start a business.

Also, consider what kind of opportunities are coming about as a result of current changes. For example, is the internet killing the print media? Sure, but that means that there are opportunities building in the internet?from an employment standpoint, that?s more important and productive then mourning the death of the print media. It?s important to gravitate toward the areas of growth, even if you don?t have much understanding of how those businesses work. The upside is that there are few ?veterans? in new and growing industries, so most of what you need to do is to a) decide to participate, b) learn all you can about the field, and c) commit and never give up.

Or, you can continue on either the path of certain burnout (too many hours) or ongoing under-employment.

Has your work week been either seriously increased or decreased in the last few years? Has it been a problem for you in any way? What ideas do you have for dealing with it?

2 Responses to What Happened to the 40 Hour Work Week?