This article topic was suggested by reader/commenter Gary Haas, and it?s a timely one. Barely two years ago, you?d have been lucky to get 1% on savings accounts or certificates of deposit (CDs). But rate increases in the past couple of years have changed that situation somewhat, and it?s now become a matter of where to get high yield savings.

You would think that wouldn?t be much of an issue. Logic dictates that all, or at least most, financial institutions would increase their rates in unison. But that’s not the way it’s working.

One of the complications is that higher rates generally aren?t available at local banks. They continue to pay some small fraction of 1%. But those continue to be the institutions where most people are holding most of their savings. In plain English, you’re getting screwed if that’s what you’re doing.

According to the Weekly National Rates and Rate Caps report issued each week by the FDIC, the interest rate picture at local banks looks like this: 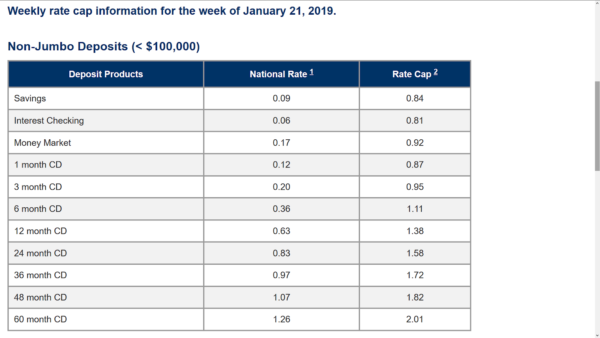 According to my research, most local banks are paying rates consistent with those in the center column.

We should suspect there are two reasons for this lack of higher rates:

From a depositor standpoint, you shouldn’t stand for this unbalanced arrangement. There are higher-paying options available.

These banks have been coming up quickly in recent years. The major disadvantage is that they typically lack local branches. But it’s precisely because of that lack of brick-and-mortar branches, as well as the staff needed to run them, that they’re able to pay much higher interest rates than local banks.

Interest rates being paid on checking, savings, and money market accounts are variable rates. They’ll adjust with changes in prevailing interest rates. Some online banks may offer a minimum rate level, perhaps as long as one year. Even still, the absence of high operating expenses enjoyed by online banks practically guarantees you’ll get higher rates than you will at your local bank.

In the case of CDs, rates are naturally guaranteed for the term of the certificate.

Just like local banks, funds held in online banks are FDIC insured for up to $250,000 per depositor, per bank.

Certificates of deposit. No minimum balance is required to open these Ally Bank CDs:

The sweet spot on these CDs is the 12 month. It pays as much or more as the 18 month and three year CDs. And the slightly higher rate for the five year doesn’t justify tying up your money for such a small rate advantage.

You can access your money for free at one of 43,000 Allpoint ATMs.

Certificates of deposit. A $1,000 minimum balance is required to open these CIT Bank CDs:

But you may also be interested in their No-Penalty 11-month CD. It’s currently paying 2.05% APY, with a minimum deposit of $1,000. The obvious advantage is that you can access your money before the certificate matures, and with no penalty. That may be worth giving up some interest for.

The disadvantage of CIT Bank accounts is that they do not come with debit cards (meaning no ATM access either). Funds can only be accessed by either electronic funds transfer, requests by mail, or using People Pay, which is a person-to-person payment method.

Certificates of deposit. No minimum balance is required to open these Capital One CDs:

The better rate opportunities begin with 12 month CDs. But one thing you have to like about Capital One 360 is that their CD rates increase at least slightly with longer terms. As you can see, with CIT and Ally that’s not always the case.

Still, in the current rising rate environment we’re in, you probably don’t want to tie up your money for any longer than 12 or 18 months. The higher interest rates paid simply don’t justify the longer-term investment.

You can access your money for free at one of 39,000 Capital One and Allpoint ATMs.

Some Factors to be Aware of with Online Banks

We’ve already discussed that online banks typically have no local branches. But there are also some other limiting factors.

One of the most prominent is that online bank checking accounts often don’t provide paper checks. That is of course an oxymoron when they?re called specifically ?checking accounts?. But at the same time, it has to be acknowledged that paper checks are disappearing from the scene quickly.

They?ve largely been replaced by electronic payments, which you can make by accessing your account either online or on your mobile device. They?re quick and easy, and most merchants and service providers prefer them over paper checks.

The other common access method is ATM cards. Even though many online banks don’t have their own proprietary ATM networks, they typically participate with national ATM networks. Those networks are usually several times larger than the biggest ATM networks of brick-and-mortar banks. You can use in-network ATMs for free, and some online banks also reimburse you for a limited number of out-of-network ATM transactions each month.

You can also link your local bank to your online bank account. That will enable you to transfer money in and out of each account effortlessly. For example, if you have a traditional checking account, with paper checks at a local bank, you can periodically move money into that account from your online bank.

Online banks should be seen primarily as places to park your money and earn much higher interest than you can at your local bank.

US Treasury securities are typically held by institutional investors, like banks and brokerage firms, as well as wealthy individuals. But what most Americans don’t realize is that virtually anyone can invest in them. You can easily do it through the US Treasury Department’s web portal, Treasury Direct.

Current Yields on US Treasury Securities

The main advantage to investing in US Treasury securities is on those with maturities of less than one year. They’re generally higher than the rates being paid on shorter-term CDs, as well as savings accounts and money market funds from online banks.

You may even decide to hold short-term money in Treasuries, while holding funds of one year or more in online bank CDs.

Recent rates on US Treasury securities are provided by the Department?s Daily Treasury Yield Curve Rates, and are as follows for January 25, 2019: 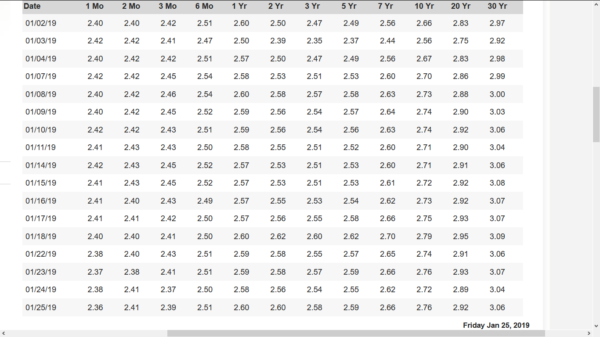 As you can see from both online banks and US Treasury securities, you do have viable alternatives to your local bank, which is probably paying some small sliver of 1% on your savings or CDs.

Now there’s no question, even with the higher rates offered by online banks and Treasuries, you still won’t be making a killing. But with interest rates between 2% and 3%, you’ll at least be keeping up with inflation. (Or at least with the published rate of inflation issue by the Bureau of Labor Statistics, about which I have serious doubts). But that’s still much better than earning 0.09% at your current bank.

If you’ve never held money with an online bank or the US Treasury, it may take some getting used to. There are no bank branches, and there are usually no paper checks. But the world is changing rapidly, and everything is going online and electronic. Increasingly, bank branches and paper checks are relics from the last century.

If you’re not completely comfortable with moving all your money to an online bank or into Treasury securities, you can put the bulk of your savings into these vehicles. You can then maintain a checking account with your local bank, just for convenience and paper checks.

Have you considered moving your savings to an online bank or into US Treasuries, and what is your feeling about either?