Despite the lack of job security, and the increase in workload and stress, the vast majority of American workers continue on someone else’s payroll. In fact, depending on who’s statistics you’re looking at, the percentage of Americans who are self-employed runs somewhere between 6% and 10% of the total workforce. That means between 90% and 94% work for someone else. That begs the question, why aren’t more Americans self-employed?

After all, at one time, America was considered the entrepreneurial epicenter of world. It was a nation of shopkeepers, farmers, tradesmen, and a whole host of other home grown occupations. Work was typically performed out of the family homestead, and businesses were often passed down from one generation to another.

But in recent decades, the trend has gone in the opposite direction. It’s an interesting development, because the explosion of technology and the Internet in the same space of time would suggest more people becoming self-employed, not less. But that?s not how things are playing out.

How Weak is Self-Employment in the US?

The only way to gauge whether the rate of self-employment is either high or low is to compare the US with other countries. Unfortunately, that effort confirms the reality that we are no longer a nation of entrepreneurs. And that’s not good for either the economy, or for the workforce.

According to OECD Data (the Organization of Economic Cooperation and Development), the US ranks dead last in the rate of self-employment among more than 30 large, generally rich countries. 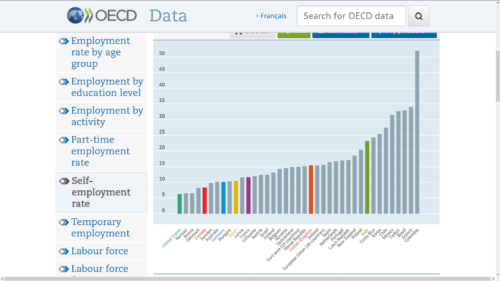 The chart doesn?t show specific rates of self-employment (without clicking on the original graph), but below are the rates of countries most comparable to the US:

We shouldn’t necessarily expect the US to lead the world in self-employment. But as the world?s largest economy, we should reasonably expect to be somewhere in the middle of the pack. Yet here we are at the very bottom.

And no one asks why.

The Reasons Why So Few Americans Are Self-Employed

Health insurance. The lack of a comprehensive and affordable health insurance system has people living in fear of being uninsured. The cost for private coverage on the health care exchanges is prohibitively high. That forces tens of millions of people to find jobs with health insurance.

Obsession with retirement. This is a topic I?ve covered in the past. Americans have become obsessed with retirement planning, which I believe is in large part due precisely to the instability of the job market. Retirement planning requires stable employment over many decades. The advent of the 401(k) and other employer sponsored plans is probably contributing significantly toward keeping people in traditional employment. We can think of them as the proverbial ?golden handcuffs?.

America is no longer a country of risk takers. In fact our entire economy and national psyche seems to be oriented toward risk reduction, if not elimination. We pretend that risk can be eradicated, and that life affords us some sort of imaginary guarantees.

That risk avoidance seems to be in vain. Most jobs today or temporary, even if they?re considered permanent. This is to say nothing of the many millions of workers who are employed on a contract basis, without either job security or employer benefits.

Against that backdrop, self-employment is a reasonable option – and perhaps the only option. But fear drives people away.

The Very Different Self-Employment Picture in the UK ? And the Promise it Holds for the US

This article was inspired by one I read on Linked In, Want to start your own business? Then what?s holding you back?

A title like that is bound to draw my interest. But what really got the brain waves flowing were the statistics the article presented. It indicated 589,000 new businesses were launched in the UK in 2017. That’s an increase of 22% over 2012. And over that five-year term, the UK experienced the creation of nearly 3.5 million startups.

Put another way, the UK had more business startups in 2017, than the US had at it?s pre-Financial Meltdown peak in 2006.

Let’s put those numbers into perspective. In 2017, the US had about 326 million people. The UK, 66 million. The US has about five times the population of the UK.

Compared to the 414,000 new startups in the US, it means the rate of new small business formations in America is running only about 13% of what it is in the UK.

That’s fairly consistent with the 15.4% rate of self-employment in the UK, versus the 6.3% rate in the US, according to OECD data presented above.

I’m not sure most Americans grasp the significance of the low levels of self-employment we have. But rest assured, it’s much more important than anyone realizes.

A significant increase in self-employment could eliminate or at least greatly reduce most of these problems.

Hope May Be on the Horizon

There?s a real possibility that self-employment in America will become more common in the near future. First, trends that hit the US often start in the UK. Examples include The Beatles (the so-called ?British Invasion? of the 1960s), and the rise of political conservatism, led by Margaret Thatcher in the late 1970s, that had its parallel in the ?Reagan Revolution? of 1980. We may think of ourselves as being cutting edge, but we often take more cues from our former colonial masters than we care to admit.

The change may already be taking place. An article in Quartz at Work, The number of Americans working for themselves could triple by 2020, suggests the number of self-employed Americans could explode to 42 million by 2020.

The projection is based on a survey taken by FreshBooks, a cloud-based accounting company, of more than 2,700 full-time US workers in traditional, independent, and small business roles about their career plans.

The change is being driven by a ?rising sense of disillusionment with the notion that a successful career means climbing the corporate ladder?. They also cited the breakdown of traditional employment, as jobs increasingly morph into freelance work and temporary assignments.

Due to the three factors I listed earlier scaring people out of self-employment ? health insurance, retirement obsession, and risk avoidance ? I personally doubt that projection. However, things could change radically in the next economic downturn.

Nothing has been fixed since the last recession. The loss of jobs in the next one could be staggering. This will force more people into self-employment, due to a lack of traditional jobs. The current nervous complacency over the economy and jobs will likely fall apart quickly. Meanwhile, the current trend toward off-loading of jobs is likely to only accelerate.

How to Get in on the Self-Employment Action

Due to the triple fears over self-employment, which are completely legitimate, it’s probably best to enter self-employment on a part time basis. That will give you an opportunity to build up a business cash flow while you’re still on your employer?s payroll.

This is a lot more important than you may think. If I’m correct, that the next recession will see a rapid loss of traditional jobs, you?ll want to be in ahead of the curve. Having a side business up and running could be either the foundation of a full-time operation, or a continuing part-time venture that could be supplemented by other work.

The TV version of self-employment, where a person starts a business and hits pay dirt immediately is a complete fantasy. It usually takes several years to go from start-up to earning a steady income. That income will build over time.

One of the under-appreciated aspects of self-employment is that we can each bring something unique to the business world. That may not seem possible when you’re sitting in a traditional job, and often being devalued by your employer. But when you get out into the world, and begin to find your economic ?sweet spot?, you begin to grasp an alternative and completely valid reality to the one you’ve been living up to this point.

It took me several years before I was able to earn a living wage from freelance blog writing. But it’s evolved to the point where I’m now turning away business. That’s something I could never imagine back in my office-and-cubicle days. After all, I came into blogging and freelance blog writing with no prior experience and no IT background whatsoever.

There?s something miraculous and liberating about making that transition that I?d love for others to experience. You might want to take a stab at doing it now. When the next recession hits ? and it will ? layoffs may be swift. It?s always best to make major transitions on your own terms, and in your own time. You have time to do that now, by starting a side business.

Longer term, I?m of the opinion that traditional employment will continue to erode going forward. I don?t even think that?s a stretch. The same internet that creates so many opportunities to start a business, also makes it easier for employers to sub-out work to outside providers, reducing the need for traditional employees. Put another way, the long-term trend is not your friend if you hope to remain in a traditional job.

Have you at least considered becoming self-employed, if only on a part-time basis? What keeps you from going forward?

( Photo by yisris )
Tweet
Share5
Share
5 Shares
← How the Job Boards Hurt Job Hunters and Help Employers
The Message from the Financial Media: It?s Your Fault You?re Not Rich →