A disturbing report came out last week in an article on Yahoo Finance in regard to state income tax refunds being delayed. In Cash-Strapped States Delay Paying Income-Tax Refunds it was reported that several states will be delaying the issuance of refunds this year in response to budget issues. 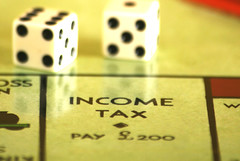 The article said that the delays represent ??essentially an involuntary no interest loan from the taxpayer.?

Projections indicate that this is a trend will continue into the foreseeable future. The Christian Science Monitor reported in December that (What recovery? Budget deficits get worse for states) 48 states face budget deficits for fiscal 2010, and at least 41 are projected for 2011.

There?s an almost comfortable tendency these days to blame all bad-isms on the state of the economy, and while the recession has certainly had a negative affect on state finances, budgetary overreach shares the blame in at least equal measure. As an example, a shocking story has recently been in the news that state and local pension plans for public workers are facing something on the order of a collective $1 trillion shortfall in funding for future benefits. This is just one example, but I think it confirms that state budget problems may be longer term than we like to think.

If that?s the case, we might expect refund postponements and other budgetary shell games to continue well into the future and some strategy is now the order of the day.

It?s virtually ironic that owing will actually give you more control of your money in this particular situation.

The ideal is to have a very small refund on both your federal and state returns, that way you aren?t giving the government an interest free loan, but you?re also not writing a check on April 15th. Unless you?re a CPA it probably won?t be possible to have your withholding come within a few dollars of your final liability, but we should all be looking to get as close as possible and, failing that to actually owe at least a little to the state.

You can do a rough projection of your tax situation for 2010 and get an approximation of your state tax liability, then adjust your withholding taxes accordingly. Withhold no more than will provide you with a small state refund, or even better, a small liability. Add up income from all sources, subtract KNOWN deductions, calculate the tax liability on the remaining income, then set your payroll withholding or quarterly estimates to come in slightly below the calculated liability.

Here in Georgia, the Department of Revenue includes an easy to use ?Schedule For Estimating Georgia Income Taxes? form at the back of the state income tax general instructions booklet, and I?d be willing to bet a similar form can be found in other state tax instruction books as well.

If you?re unsure or if your legs get wobbly?

Be careful however in using the do-it-yourself approach if you live in California, New York or other states with notoriously complicated tax codes. If that?s the case, a projection shouldn?t be undertaken by anyone other than an experienced, computer-armed CPA or tax preparer. There?s more to know in some state tax codes than ordinary people have time to learn.

If your tax situation is fairly straightforward, the problem may be solved simply by adding an extra exemption or two on your state withholding through the human resources department at work.

If your tax situation is fairly complex, or if the idea of projecting your own tax liability freaks you out, by all means, pay a few extra dollars to have it done by a professional.

Tax codes are more complex than they were just a few years ago, even at the state level and unless you work in the field you may not know the various nuances of your state tax code or of pending changes that could affect your liability. Most tax preparers charges far less for an income tax projection than they do for preparing your return, and it could be money well spent.

Pick a number between zero and 500

While the preferred situation will be to owe a little money on your state return, you don?t want to get over-aggressive in owing here. State tax authorities will impose penalties if your final liability exceeds a certain threshold, typically $500. As such, you?ll want to owe some number greater than zero, but less than $500, otherwise your overall liability will be higher than it would be otherwise. We?re looking to avoid having our money tied up for an indefinite period of time here, not to get stuck paying more than we should.

It?s too late to fix the situation for the tax year just past, but we have plenty of time to prepare our tax liabilities so that we don?t end up providing an ?involuntary no interest loan? to our respective states next spring. I?m OK with ?rendering unto Caesar that which is Caesar?s?, but I?d like to keep that which is mine, if it?s all the same.

How about it, any CPA?s, accountants, tax preparers or good old-fashioned concerned citizens want to weigh in with some ideas on this?