If you’re unemployed, under-employed or just looking for a better employment situation, you may do well to ignore the unemployment rate. Like the official inflation rate and so many other statistics, the unemployment rates is – shall we say – highly optimized. It’s more of a misleading indicator, and of little value to the job seeker.

The Official Unemployment Rate is an Optimistic Fib

The official unemployment rate for most of this year has been hovering around 4% or a little below. It?s currently at 3.7%. That’s a very good number based on the job market of the past few decades. But either it glosses over hidden weakness, or it’s an outright fabrication. We should suspect the latter, since the official rate does not count people who have given up looking for work.

It also does not count the number of people who work part-time, but want full-time work. According to the Bureau of Labor Statistics, that number was 7.2% as of June, 2019. And even that doesn?t count those who have simply given up looking for work.

Whether the number is 7.2% or higher due to the uncounted millions who have given up looking for work, it’s a lot higher than the polite 3.7% being celebrated by the government. And cheerfully trumpeted by Wall Street and the mainstream media.

None of this should come as a surprise either. The number of large employers in the US has just about crashed since 1998. There are at least 50% fewer publicly traded companies in the US than there were in the late 1990s. That goes a long way toward explaining the lack of jobs that pay both a living wage and employee benefits.

Anecdotally, I know a lot of people who are in some level of employment disarray. Either they?re:

Many seem on the edge of their current situations. There?s no statistic that counts people who are in this situation, but we can guestimate.

That looks like a small percentage drop at “only” 3.1%. But in a country of over 325 million people, that translates to well over 10 million people disappearing from the workforce in a little over 13 years. On a pro-rata basis, that change is huge.

The situation for working age men is even more pronounced. The following table from the Federal Reserve Bank of St. Louis shows the labor participation rate among this group has declined from a high of more than 87% in 1950, all the way down to 69% in May of this year. As recently as 2000, it was sitting at 75%. 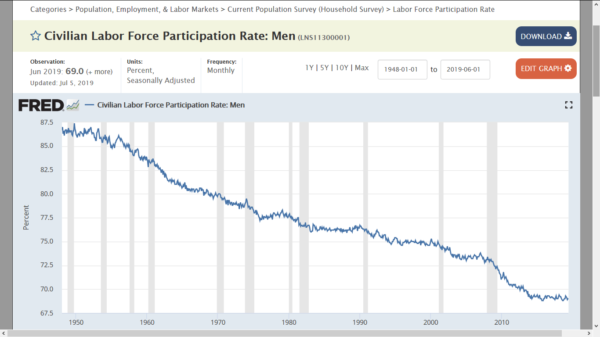 The speculation is that people are dropping out of the labor force either by staying in school longer, retiring earlier, or simply giving up the job search. No matter how it’s sugarcoated, the fact that all three drivers are occurring simultaneously is an indication of a very soft job market.

In case you think I’m exaggerating the unemployment problem, Newsweek did a feature on the same topic, The ‘Big Lie’ Behind the Rosy Unemployment Rate.

The truth is that nobody knows how many people are either under-employed or outright unemployed. But it can be even more complicated than that. Exactly what your employment situation is will also be affected by your career field and by your geographic location.

For example, if you?re a civil engineer or a dentist, the unemployment rate is less than 1%. But if you?re working in construction or related fields, the rate is hovering between 8% and 9%. This against the backdrop of a ?booming? housing market, in which new construction is in short supply.

Geography also plays a significant role. According to the latest count by the Bureau of Labor Statistics, the unemployment rate is just 1.5% in Burlington, Vermont, but 6.4% in Fresno, California.

If you?re in either a weak employment field or location, the official national unemployment rate may be completely meaningless for you.

Your Job Seeking Efforts Should be Based on Reality, Not on the Official Fabrication

If you?re finding it more difficult to find a job in the face of an ?improving job market?, the ?lowest unemployment rate in years?, or ?the best job market in years? ? or whatever other employment-related cheerleading you hear ? don?t come down too hard on yourself. None of that is helpful. Statistics are easy to believe when you?re a statistician, a politician, or someone who?s either currently well-employed or not in the job hunt.

The ?system? ? or whatever label we want to use to describe it ? has become adept at making it look like it?s your fault if you?re unemployed, under-employed or finding it difficult to move forward in your career. What?s sad is that so many people believe that narrative. If you do, it?s totally disempowering, and that serves no useful purpose.

That also doesn?t mean you just give up and resign yourself to becoming a permanent member of the disenfranchised either. What it mostly requires is a change in strategy.

Where Do We Go From Here?

In this job market, the usual recipe of acquiring a laundry list of credentials, creating a pretty-looking resume, and blasting it out to hundreds or thousands of potential employers is largely a waste of time. The real problem is that in most fields, there are more people seeking jobs than there are jobs available.

Employers are sifting through the thousands of resumes they receive each year, and culling the list down to the very slim number of candidates who represent an exact fit for the very specific positions they’re looking to fill. Increasingly, they don’t even need to fill jobs. They can be outsourced, off-shored, or performed by the latest and greatest computer applications. Downsizing, a methodology once reluctantly reserved for recessions, has become a permanent strategy.

The current and foreseeable job market requires a totally different strategy. If you’re well-employed, or just landed a career position right out of college, count yourself among the lucky. But if you lose that good job, you may find that there’s not a comparable one waiting for you on the next go round.

Strategies to Use to Ignore the Unemployment Rate

Here are strategies I recommend, in no small part because I’m using (or have used) all three.

Become a “mobile creative”. Careers are looking more like a patchwork quilt of people holding multiple contract assignments, or juggling two or more part-time jobs or a part-/full-time job and a business. This can actually work, if you embrace it! I know because I’ve been doing it for much of the past 10 years. We can loosely refer to this strategy as becoming a “mobile creative”. That’s a person who develops mobility between business sectors and ways of earning income.

You can read all about it in Mobile Creatives ? Are You Part of the Rising Class of New Entrepreneurs? It’s a strategy I use every day, and one that I highly recommend. Not the least of which because you can build it around your own unique circumstances, talents and skill sets.

Look for work in small businesses. No, you won’t usually find the big money or the cradle-to-grave benefits that most job-seekers want. But you will find an income working for small businesses. And these days, for a lot of people, that means plenty.

The advantage here is that the traffic is a lot lighter. No one is looking to work for small businesses. You may be the only job candidate a small business owner talks to for months. But score a job here, and you may develop wider job skills (small businesses are less specialized – you’ll do a little bit of everything), employer loyalty is much greater, and you can usually work out a more flexible schedule. And it blends well with being a mobile creative.

These days it seems that everyone wants a job ? few want to start a business. But becoming self-employed may ultimately provide more security, opportunity and income than a job. This is especially true as technology continues to make so many job categories unnecessary or uneconomical.

Ultimately some combination of these strategies may prove to be your best hope, which is exactly what becoming a mobile creative is all about.

What do you make of the unemployment rate, the job market and the best income strategies going forward?